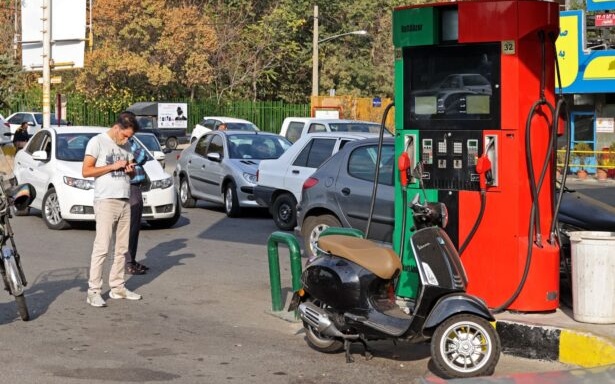 Vehicles queue at a petrol station in Tehran, Iran, October 26, 2021, amid a disruption from a cyberattack (Atta Kenare/AFP/Getty)

A New York Times article, published the day before talks over Iran’s nuclear program resume in Vienna, details attacks by both the Israelis and Iranians.

The report says that days after the disruption of Iran’s petrol system, Iranian-affiliated hackers breached an Israeli LGBTQ dating site and released details of hundreds of thousands of users. A major Israeli madical facility was also breached.

On November 17, US cyberdefense officials warned of an escalating Iranian effort to insert malicious code into the computer networks of hospitals and other critical infrastructure. A day later, the Justice Department indicted two Iranian hackers over attempts to intimidate voters in the 2020 elections with a clumsy effort to intimidate voters.

Iran is struggling to reconnect its gas distribution system after Tuesday’s cyberattacks.

Of 4,300 gas stations connected to the system, only 220 have been reconnected, said a spokeswoman for the National Oil Products Distribution Company.

Fatemeh Kahi said, “Nearly 3,000 stations can distribute fuel offline, but at the open price”, ruling out purchase of the monthly subsidized ration of petrol.

ORIGINAL ENTRY: Iran’s petrol stations were disrupted by cyberattacks on Tuesday, weeks before the second anniversary of national protests that followed hikes in fuel prices.

Iranian officials said up to 1,500 people — demonstrators, bystanders, and members of security forces — were killed in the repression of the rallies in November 2019. Thousands of Iranians were detained.

See also “How Could They Shoot at a Kid?” — The State Violence Against Protesters

State TV IRIB announced, “The disruption at the refuelling system of gas stations…in the past few hours, was caused by a cyberattack. Technical experts are fixing the problem and soon the refuelling process…will return to normal.”

The Oil Ministry initially claimed that only sales with smart cards, used for cheaper rationed gasoline, were disrupted and customers could buy petrol at higher rates. But the long queues at stations testified to a wider shutdown, with Tehran’s forecourts reportedly offline for five hours.

People complain that there no petrol stations in operation. Correspondents reporting from major cities say the stations are deserted.

Though all signs suggest it's a cyber-attack, nobody on TV actually calls it that. Reporters simply say the problem was caused by a "disruption". pic.twitter.com/tkv9kGyTB5

Iranian officials finally acknowledged cyberattacks late Tuesday. They claimed the operations were “probably” state-sponsored, but said it is “too early” to name any country.

The cyberattacks included messages challenging the Iranian regime, including the Supreme Leader.

Iranian petrol stations have been targeted by a nationwide cyber-attack, with digital screens displaying the message "64411" at pumps. Some billboards have been caught on video display the messaging: "Khamenei, where is our petrol?"pic.twitter.com/Ql8vofFbAF

In July, Iranian train services were delayed by cyberattacks, with with hackers posting the phone number of Supreme Leader Khamenei’s office. The website of the Transport Ministry was knocked offline by “cyber disruption”.