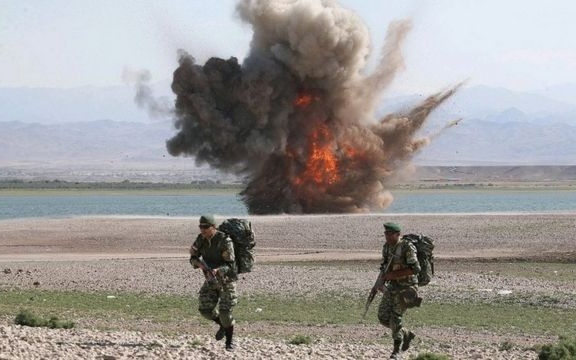 An Iranian Army military exercise in northwest Iran near the border with Azerbaijan, October 1, 2021

Verbal clashes between Iran and Azerbaijan have resumed, only three days after a call between Foreign Ministers supposedly eased tensions.

Speaking by video at a summit of the Commonwealth of Independent States on Friday, Azerbaijani President Ilham Aliyev claimed that Iran and Armenia have smuggled drugs for years to Europe across the territory of Nagorno Karabakh, disputed between Armenia and Azerbaijan. He said Azerbaijani forces have doubled their seizures of heroin along the border with Iran.

Iranian Foreign Ministry spokesman Saeed Khatibzadeh responded, “Unfortunately, it seems that despite the positive and private messages received from Baku in various phone calls, the Azeri government has an intention to make baseless media statements that, of course, will be responded to appropriately.

The Secretary of the Supreme National Security Council, Ali Shamkhani, tweeted, “Leveling accusations against a country the international community recognizes as a frontrunner in the narcotics fight will have no effect but invalidate the speaker’s words.”

Returning to Iran’s claim of sinister Israeli influence in Azerbaijan, Shamkhani urged President Aliyev , “Accusing a country that is recognized by the international community as a hero of the fight against narcotic drugs has no effect but discrediting the speaker. Be careful of costly traps laid by devils.”

Iran and Azerbaijan have lowered tensions through a phone call between Foreign Ministers on Tuesday.

Iran’s Hossein Amir-Abdollahian and Azerbaijan’s Jehon Peramov “stressed the need for the resolution of recent issues between Baku and Tehran through dialogue and cooperation in a calm and friendly atmosphere”, according to Iranian State outlet Press TV.

Amir-Abdollahian emphasized “the need for mutual respect, independence, sovereignty and integrity of the territories of both countries” as he proclaimed that “Tehran and Baku have a long-standing relationship.”

The Foreign Minister made no reference to Tehran’s heated condemnation of Azerbaijan’s links with Israel, or of military exercises. Insted, he said the two countries must “prevent misunderstandings”: “It is better to continue their relations in the right and rapidly growing direction….The two countries have enemies that should not be given an opportunity to strain relations between them.”

Amir-Abdollahian did say that Tehran is “waiting for an end to the problem of Iranian truck transportation” for Armenia through Azerbaijani territory.

The Azerbaijani foreign minister, for his part, described his country’s relations with Tehran as “friendly” and said that “relations with friendly countries are a priority for the Republic of Azerbaijan.”

Calling for “solving problems through dialogue and in a calm and intimate atmosphere,” Peramov suggested that customs officials in the two countries hold talks to end the problems of exporting Iranian goods through Azerbaijani territory, and promised to pursue the case and release of two Iranian drivers, who were arrested last month.

According to Press TV, Azerbaijan’s Peramov said “relations with friendly countries are a priority for the Republic of Azerbaijan…solving problems through dialogue and in a calm and intimate atmosphere”.

The site said Peramov suggested talks between customs officials over the export of Iranian goods through Azerbaijani territory. He pledged to take up the case of two Iranian truck drivers arrested last month.

ORIGINAL ENTRY, OCT 6: Tensions are rising between Iran and neighboring Azerbaijan, with each side accusing the other of military provocations and reports of the Azerbaijani Government closing the Iranian Supreme Leader’s office in the capital Baku.

Iran was agitated by joint military exercises inside Azerbaijan with Turkey and Pakistan on September 12. Tehran is denouncing Azerbaijani links with Israel. It is protesting restrictions on Iranian truck drivers crossing to Armenia, with whom Azerbaijan fought over the disputed Nagorno Karabakh area last November.

See also World Unfiltered: Why We Should Care About Azerbaijan

On October 1, Iran responded with its own military drills near the northwest border with Azerbaijan, as the Revolutionary Guards deployed military equipment. Azerbaijani President Ilham Aliyev claimed surprise and expressed concern: “Every country can carry out any military drill on its own territory. It’s their sovereign right. But why now, and why on our border?” But rather than ease the situation, the Supreme Leader stepped up criticism of Baku last weekend.

On Tuesday, Iran’s semi-official outlet Tasnim said the Supreme Leader’s office in Baku had been shut. Both Iranian officials, including its Ambassador to Azerbaijan, and the Azerbaijani Interior Ministry denied the report: they said an official congregation hall had been closed because of concerns over Coronavirus.

But on arrival Moscow for talks with Russian counterpart Sergey Lavrov, Iranian Foreign Minister Hossein Amir-Abdollahian tried to maintain pressure. He said Tehran expects Russia to be “sensitive” towards Israeli movements in the South Caucasus and “any possible changes to borders”.

Amir-Abdollahian said he is confident of “good agreements” with Lavrov.

Meanwhile, Azerbaijan and Turkey are staging military drills on Wednesday.

Iran and Azerbaijan share a 700-km (434-mile) border. Kioumars Heydari, the commander of the Iranian Army’s ground forces, said during the drills last week, “Since the arrival of this [Azerbaijani] regime, our sensitivity to this border has increased and their activities here are fully under our observation.”

Heydari declared that Tehran was monitoring the presence of “terrorist forces that came to the region from Syria”.

On Tuesday Kamal Kharrazi — Iran’s Foreign Minister from 2007 to 2015 and the current head of the Strategic Council on Foreign Relations — played up the Israel angle as “strongly warned” Azerbaijan not to import its security from abroad: “Given their illegitimate goals and interests, this can lead to arms race in the region and even end up afflicting damage or even ruination on the host country.” He continued:

If, today, the Islamic Republic is one of the region’s undisputed powers, it is because of its self-reliance and independence from foreign forces.

Undoubtedly, the Zionist regime has not set up a lair in Azerbaijan without any expectations. It harbors the sinister goal of igniting war in the region on the back of the current [Azerbaijan] government’s strategic mistake. And this would be a tragic disaster.