Iran: “Terrorist Groups” Are Source on UN Report on Our Human Rights Abuses 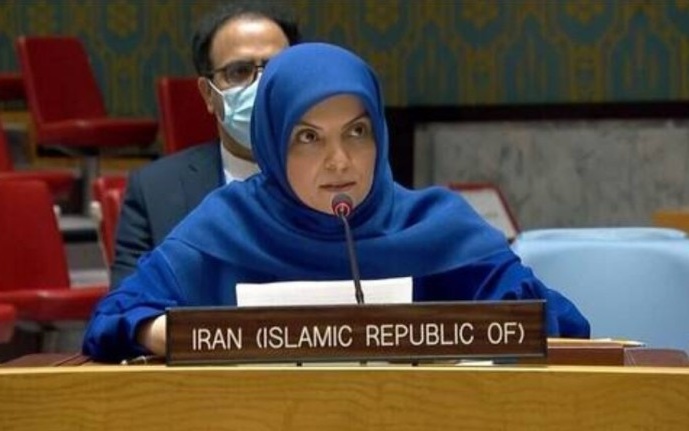 Iran has responded to the latest UN report on its human rights abuses by claiming that “terrorist groups” are the source for Special Rapporteur Javid Rehman.

Zahra Ershadi (pictured), Iran’s Deputy UN Ambassador, made the declaration on Monday after Rehman’s presentation to the UN General Assembly. She offered no evidence for her assertion.

Rehman told the Assembly that Iran continues to impose the death penalty in violation of international law:

There are extensive, vague, and arbitrary grounds in Iran for imposing the death sentence, which quickly can turn this punishment into a political tool.

In addition, the structural flaws of the justice system are so deep and at odds with the notion of rule of law that one can barely speak of a justice system. The entrenched flaws in law and in the administration of the death penalty in Iran mean that most, if not all, executions are an arbitrary deprivation of life.

Rehman criticised the use of vague charges for the executions,, including of political prisoners: moharebeh (“waging war against God”), efsad-e fel-arz (“corruption on earth”), and baghy (armed rebellion”).

The Special Rapporteur also cited his extreme disturbance at Iran’s continued sentencing of juveniles to death.

The Iranian Government has shown it can reform, which is welcome. I call on the authorities to undertake further reforms in order to end the imposition of the death penalty in violation of international law, in line with consistent recommendations made year after year to Iran by international human rights mechanisms.

Rehman’s latest report also highlights the long-standing abuses of the Islamic Republic, including repression of civic space; discrimination against religious, ethnic, and sexual minorities; and dire condition in prisons.

The Secretary-General of Iran’s Human Rights Office, Kazem Gharibabadi, insisted, “At a time when the world is suffering from the attitudes and policies of such Western countries like the United States, issuance of such a report against the Islamic Republic, which, itself, is a victim of these countries’ actions is a completely political and diversionary measure.”

Iran has refused recognition of the Special Rapporteur. It has repeatedly blocked Rehman from entering the country, leading the official to gather evidence through phone calls and e-mail communication with witnesses inside the Islamic Republic as well as from sources outside Iran.