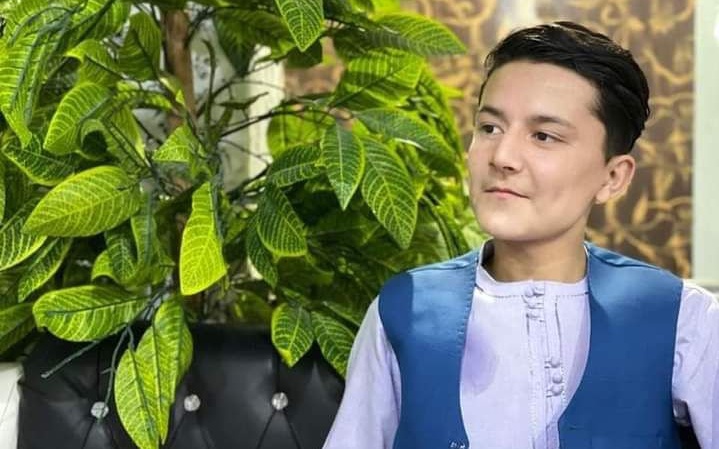 Masweer Mohibi, 15, died of injuries suffered in the October 8 bombing of a mosque in Kunduz in northern Afghanistan

Dehati, a local administrative official from Kunduz, asks me to listen to a song that went viral on social media after the Taliban took over Kabul two months ago. The song, “Sarzamin Man” (“My Homeland”), written by the celebrated Afghan singer Dawood Sarkhosh, is a tale of separation, pain, and longing for one’s homeland.

Sarkhosh belongs to the Hazara ethnic community, which has long faced discrimination in Afghanistan including forced displacement, targeted executions, and repression.

On October 8, a suicide bomber carried out an attack on a Hazara Shia mosque in Kunduz during Friday prayers, killing more than 70 people and wounding another 100, some of whom succumbed to their injuries. The attack was claimed by the Islamic State Khorasan Province, the regional affiliate of the Islamic State group in Afghanistan.

Attacks on Hazara have been on the rise, especially since the Taliban took control of Afghanistan in August. Last month, more tahn 1,200 Hazara residents from Daikundi, in the center of the country, were forcibly evicted from their homes by the Taliban and their houses given to fighters. Hazara families from Mazar-e-Sharif and Hemland have also been ordered to leave their homes. An Amnesty International investigation revealed that the Taliban brutally murdered nine ethnic Hazara men in Ghazni Province, a month before the country fell.

In Kunduz, local families told me that the bomber walked through the group of worshippers and stood at the front of the congregation, killing the imam and many elders of the community.

According to Dr. Saleem Javed, a human rights activist and a prominent voice in the Hazara community, eyewitnesses saw the suicide bomber standing in the second row. He notes:

Local families share stories of loss. Dr. Rehmaty’s two sons, aged 21 and 23, were killed in the blast. A young Hazara woman lost all the men of her family, including her fiancé, who she was set to marry in the coming weeks.

“She’s not the only one. Because the mosque was filled with men and boys, many women have lost their children and men of the family,” a visibly distressed Dehati said during our video call. “Some were the only source of income for their families. With women out of work, how will they survive?”

The Taliban banned women from working in most circumstances on August 15. Many of them are single mothers or sole breadwinners surviving on minimal savings.

Dehati was at the Kunduz city bazaar when the explosion hit the Said Abad Mosque: “When I heard about the blast, I knew that there would be utter chaos at the mosque so I decided to go to the Kunduz district MSF [Médecins Sans Frontières] hospital instead.”

Dehati, a Sunni Muslim from the Hazara community, has organized gatherings to bring awareness to forced displacements and targeted killings. He has assisted victims of blasts and accidents, even before the 2015 US airstrike on the MSF hospital in Kunduz killed 42 people, including 24 patients and 14 staff.

Dehati arrived at the hospital within 20 minutes of the blast on October 8:

Seriously injured people and shattered body parts were being brought in blankets. The families gathered outside the hospital and there was no other sound one could hear apart from the wails of mothers, wives, and daughters.

Some of us activists, along with the medical staff, started carrying the victims into the trauma center. Some were missing limbs, yet breathing. Some of them were dead by the time we brought them inside the wards.

What was worse is that the 15-year-old son of one of my friends was among the seriously injured. His father is a physician, Dr. Mohibi, and I can’t explain how heart-wrenching that moment was for all of us who watched him grow as a child.

After fighting for his life for four days, the teenager Masweer Mohibi succumbed to his wounds.

“I’m with one such family at the moment. I am heartbroken. I’m sorry.” Dehati speaks to me after having visited the home of Haji Mihmandost, an elder from the Kunduz Hazara community. The 74-year-old Mihmandost lost ten members of his immediate and extended family.

A week later, another one of the injured, 23-year-old Ali Mohammed Nazari, died fighting for his life. A few hours later, another deadly blast struck Kandahar.

During Friday prayers on October 15, the Bibi Fatema Mosque in Kandahar in southern Afghanistan was attacked in a suicide bombing. The explosion, later claimed by ISKP, killed 42 Shia worshippers.

Kandahar’s health sector was already under pressure. Local journalists reported that many citizens were lining up to donate blood as the city rushed to bury the dead and care for its injured.

Kandahar is not a Hazara-dominated area. Shias of different ethnicities – Qizilbash, Qandahari, Hazara, and others — collectively attend the Friday prayers at the mosque. It is, however, important to note that Kandahar is a Taliban stronghold and was the emirate’s capital in the 1990s.

The Taliban’s Supreme Leader Habitullah Akhundzada is also thought to be living there. The attack has dispelled the impression that calm and security had returned to Kandahar, the heart of the Taliban. Or at least not for the city’s Shia community.

(On October 17, a senior Taliban official told India’s News 18 channel that Akhundzada died in a suicide attack orchestrated by Pakistani forces in 2020. The Taliban has yet to officially comment.)

Expressing concern for the security of Afghans, Javed continues:

It is quite alarming as it shows the terrorist cult [ISKP]’s presence right under the nose of the Taliban’s Amir-ul Momineen, the Supreme Leader.

Besides showing that ISKP is establishing its footprint in the Taliban’s [former] capital, the attack has a very strong propaganda value for ISKP to recruit hardliners from the Taliban.

Such attacks on Shia mosques can be a very calculated move by ISKP to drag the Taliban into another war. If the Taliban decides to provide protection to Shia mosques, ISKP will go out declaring the Taliban the protectors of ‘infidels’, for recruitment.

One of the Hazara families, the Rajabis, lost members in both the Kunduz and Kandahar blasts. The father, Nemat Ullah Rajabi, had been mourning the loss of his son Ezzatullah, killed in the Kunduz attack. A week later, Nemat was holding a mourning ceremony in Kandahar’s Bibi Fatema Mosque, the day of the second suicide bomb attack. That one took his life.

The growing violence against the Hazara community has highlighted a century-long struggle against prejudice and discrimination in the country. “It is really sad that Shias and Hazaras at large are the targets of both Taliban and ISKP,” Javed says.

In the aftermath of the two explosions, people in Kunduz expect more attacks. Dehati shows me the Kunduz market in our video call:

We’re living in fear. After Kandahar, it has become evident that the Hazaras and Shias are an easy target for the terrorists. There’s a graveyard-like silence even in the busiest of markets in Kunduz.