From the Frontline in Eastern Syria’s Ongoing Conflict 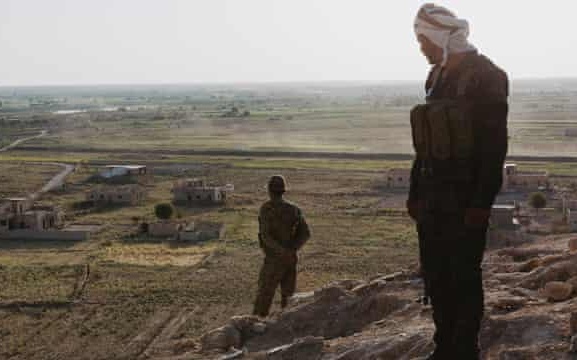 Al-Bukamal is a city of only 43,000 in eastern Syria, but it is in a vital position in the country’s 127-month conflict.

The city has been occupied by pro-Assad fighters since November 2017, when the Islamic State was pushed out as an organized force in the region. However, it is near Kurdish-controlled territory, an area which Bashar al-Assad has pledged to overrun in taking “every inch” of Syria.

The city is also a base and transit hub for Iran-backed militia, weapons, and equipment moving throughout regime territory. Israel, which sees a sustained Iranian presence as a threat, has periodically carried out airstrikes on the militias in Al Bukamal and across the border in western Iraq.

And to the south the US is still present, despite Donald Trump’s attempts to withdraw all personnel. Its main position is the Tanf base, surrounded by a 55-km “security zone”.

The Guardian’s Martin Chulov reports from al-Bukamal, “Whoever secures passage here has a significant say in events on both sides of the Euphrates.”

He speaks to a Kurdish officer on the ridge of Baghouz Mountain, “That’s why we’re here, watching the spectacle. All that land in front of us will be fought over for years to come.”

Chulov notes that Al-Bukamal is key to a “land bridge” for Iran and its Lebanese ally Hezbollah from Iraq across Syria to Lebanon. The campaign was pursued by Maj. Gen. Qassem Soleimani, the head of the Quds Forces of Iran’s Revolutionary Guards, and the leader of the Iraqi militia Kata’ib Hezbollah, Abu Mahdi al-Muhandis.

Both were killed in a US drone strike outside Baghdad International Airport in January 2020, but Tehran’s mission continues.

A Kurdish soldier notes the Israeli airstrikes, including a September 21 attack killing five people, but says:

They never bother us. I’m not sure it bothers the Iranians either. Al-Bukamal is still very busy. There is a lot of smuggling through al-Qaim, and some of it crosses the river in boats.

A laborer in Al-Bukamal, Khaled Sohail, is far less complacent about the Iranians and the Iraqi militias who replaced the Islamic State:

When the Shias moved in, there was just as much fear. The Iranians have a lot of money to spend and have influenced the tribes. But they’re not the worst – it’s the [Iraqi] Hashd al-Shaabi who scare everyone. They’re Shia, and very sectarian.

Other residents in Deir ez-Zor Province, with a majority Arab population, echo the sentiment. They point to Kata’ib Hezbollah’s Brigade 47, led by Iranian officer “Hajj Asker”. One says, “They are the ones who have sold the town to Iran. And they did so cheaply. They are helping the smuggling. This won’t end well.”

They are bringing their ways to the area. There are people praying like Shias. What is happening there is changing not just the region but the town itself. There are schools learning Persian history, and Shia religious leaders who have influence over the communities. They are more powerful than Bashar’s army, who stand by while Iran and its friends make their own plans.

Across the Euphrates River in the town of Baghouz, a Kurdish officer says of the foreign militia and Assad forces: “They think it’s their land. [But] others have a say in that including us. I don’t see an end to the fighting.”