Trumpist Audit in Arizona: Biden Vote Up, Trump Vote Down 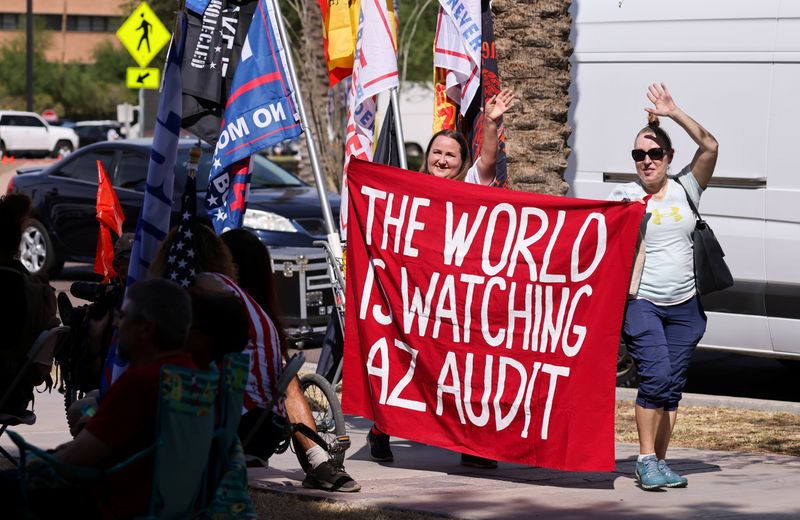 Trump supporters outside the Arizona Senate during the announcement of findings from a Trumpist audit of the 2020 election in Maricopa County, Phoenix, Arizona, September 24, 2021. (Mike Blake/Reuters)

A Trumpist audit of the 2020 Presidential election in Arizona’s Maricopa County has added 99 votes to President Joe Biden’s count and reduced Donald Trump’s tally by 261.

Trumpist Republicans have pressed the audit for months in Maricopa, the state’s largest county which includes Phoenix, where Biden led by about 45,000 votes.

Biden won Arizona by 10,457 votes, the first victory for a Democratic Presidential candidate since Bill Clinton in 1996. The state’s 11 electors — alongside close Biden wins in Georgia, Pennsylvania, Wisconsin, and Michigan — have been the focus of Trump attempts to overturn the result.

The report from the company Cyber Ninjas demolished the Trumpist line of mass fraud in the election, which included attempts by Trump supporters to block the initial count in Maricopa.

Karen Fann, the Republican Senate President who ordered the vote review, conceded on Friday, “Truth is truth and numbers are numbers.”

Experts on election administration said none of the claims had any substance. Maricopa County officials used Twitter to debunk the allegations as they were made, citing court proceedings “where you can’t lie willy nilly”.

Among the conspiracy theories was one by Shiva Ayyadurai, who has also refused to accept his loss in a Republican primary for a US Senate seat in Massachusetts. He claims 4.2% of Mr. Trump’s votes were siphoned away by fans of the book “The Hitchhiker’s Guide to the Galaxy”, in which the number 42 is the ultimate answer.

But Fann said the Arizona Attorney general, a Republican, must investigate the assertions.

Trump again suspended reality to proclaim that the review had “uncovered significant and undeniable evidence of FRAUD! Until we know how and why this happened, our Elections will never be secure.”

The audit was largely financed by $6.7 million in donations from far-right groups and Trump supporters. The review team was run by Trump supporters and conspiracy theorists. The chief executive of Cyber Ninjas, Doug Logan, spread falsehoods that rigged voting machines caused Trump’s loss.

Despite the outcome, Trumpists are maintaining their campaign. On Thursday, the Texas Secretary of State’s office ordered a “comprehensive forensic audit” of the results from four of the state’s largest counties.