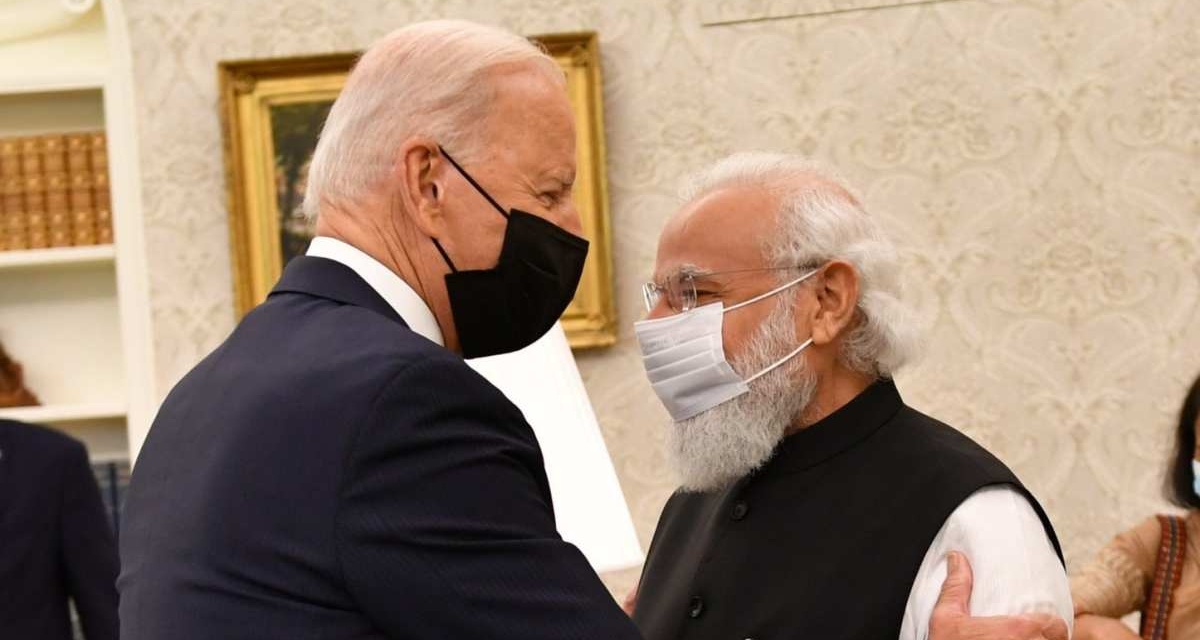 As Indian Prime Minister Narendra Modi spoke at the UN General Assembly on Saturday, I joined a high-profile panel on India Ahead News to analyze the address before and after its delivery.

The strongest part of the speech was on Coronavirus and dealing with the pandemic. It is important for India’s position and for Modi’s position, given he was under a great deal of political pressure in the spring because of his handling of the crisis at that time.

But on Afghanistan, versus his declaration of “terrorism”, the line by Pakistan and others is that you should engage with the Taliban to check that terrorism. India is still sidelined at this point.

And the third issue, which will be picked up by critics of Modi inside and outside India, is the reference to “democratic values” that he kept hitting again and again.

ORIGINAL ENTRY, SEPT 25: I spent Friday afternoon with Indian TV outlets, before and during the meeting between India’s Prime Minister Narendra Modi and President Joe Biden in the White House, to outline the issues.

We consider the complexities and the tensions of the Indian Government’s focus on Pakistan v. the Biden focus on China, as well as implicit American references to issues within India such as discrimination by the Modi Goverenment.

We also look at Friday’s initial meeting of the leaders of “The Quad” — Modi, Biden, Australian Prime Minister Scott Morrison, and Japanese Prime Minister Yoshihide Suga — to consider the relationship between the group and last week’s Australia-UK-US agreement over nuclear-powered submarines.

The Indian portrayal of the meeting between Prime Minister Modi and Vice President Kamala Harris is very different from what is presented by the American side.

Outlets like The New York Times and Washington Post don’t have a word about the meeting, but when you do see the meeting mentioned, the American emphasis is on Harris’ statement about “democracies” — an implicit reference to Indian internal affairs, such as the Modi Government’s treatment of non-Hindus.

An important point for India: the US does not consider AUKUS and The Quad to be linked to putting Pakistan on the sidelines, or even getting tough with Pakistan.

When it comes to China, the question is, “What type of security?” AUKUS is a naval military approach. India has rejected that military approach — it sees security as political and economic, and one in which it does not break with Beijing.

#ModiInAmerica #Afghanistan is not a priority for the #Biden administration. #Pakistan has been handed by the US’ responsibility for Afghanistan & US is not going to turn against Pakistan: Prof @ScottLucas_EA, US/ British Foreign Policy & International Affair Expert@avniraja pic.twitter.com/XSqlD2hSSb

While there is a mutual connection — Coronavirus, climate change, trade and technology — India wants to talk Pakistan and the Biden Administration wants to talk, “How do we contain China?”

Afghanistan is not a priority for the Biden Administration except for how to deal with Islamic State Khorasan. Pakistan has in effect been handed responsibility for Afghanistan by the US.

Does Modi accept those US priorities?