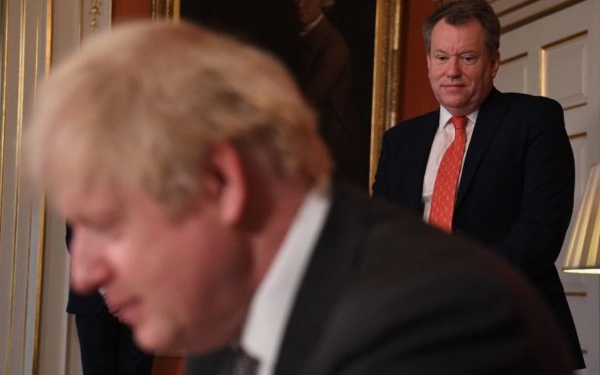 Co-published with the Centre for Brexit Studies

In September 2020, Northern Ireland Secretary Brandon Lewis told the House of Commons that the Johnson Government was ready to break international law and the impending Brexit Agreement with the European Commission, withdrawing the protocol over Northern Ireland and the Irish Republic.

One year and five days later, Brexit Minister David Frost told the House of Lords that the Government is prepared to suspend the protocol.

Lewis’s threat was quickly rebuffed. Frost’s will be as well.

Prime Minister Boris Johnson’s bluster, falsehoods, and bluffs have been called. He and his Ministers have no more chips. The customs line down the Irish Sea remains, even as the Government has still not made any provision for regulation of a border within the United Kingdom.

The Kid Shouting in the Playground

Shaking his finger in the House of Lords, Frost struck the pose of the kid in the playground shouting, “I’m gonna get you.” He set out “tests” that would enable the UK to trigger Article 16 of the Protocol, permitting suspension if there is a significant impact on everyday life.

I urge the EU to take this seriously. They would be making a significant mistake if they thought that we were not ready to use Article 16 safeguards, if that is our only choice to deal with the situation in front of us. If we are to avoid Article 16, there must be a real negotiation between us and the EU.

But of course there has been a “real negotiation” for years. That is why there is a Northern Ireland Protocol in the Brexit Agreement, despite Johnson’s lie in the 2019 General Election campaign that the customs line did not exist.

And there has been a “real negotiation” over implementation of the Protocol, with working arrangements for customs, health, and safety checks between Northern Ireland the rest of the UK.

The issue is that the Johnson Government doesn’t want those arrangements. It stalled on putting the infrastructure in place. It fed tabloid headlines of “sausage wars”, effectively an admission that meat had to be subject to the checks it was denying. The EU accommodated the negligence and the bluster by accepting grace periods through 2021, but now the final date is September 30 — and the UK still isn’t ready.

So Frost, who replaced Michael Gove in March, once more struck his tough guy pose.

Except this time the EU didn’t even glance at him. Two days later European Commission President Ursula von der Leyen’s State of the Union speech did not mention Brexit a single time.

The silence was loudly clear. In public the EU tells London, “We’ve moved on.” In private, it is pursuing the ground-level diplomacy and planning that the Johnson Government has set aside.

Then Šefčovič visited Northern Ireland for two days. He emphasized, in the face of the Democratic Unionist Party’s threat to collapse the Northern Irish Government, that an attempted renegotiation of the Protocol would only bring more instability for businesses and communities. He took equal care to stress the positive:

My exchanges here have strengthened my conviction that enormous benefit can come from [Northern Ireland’s] unparalleled access to 2 major markets. As put by a business leader: jam on both sides of the bread.

Specifically, Šefčovič reassured Belfast that EU rules would be changed to ensure continued access to vital medicines, countering the disruption threatened by the Johnson Government.

The messages, in contrast with Frost’s shouts, resonated. Aodhán Michael Connolly, the director of the Northern Ireland Retail Consortium, tweeted, “No big speeches and no big interviews. Just lots of exchange of information and talking through the problems and pitching the solutions.” Belfast Mayor Alex Maskey praised the “clear listening and problem solving mode”.

Last Tuesday, only a day after his threat, Frost effectively threw up his hands. Amid the warning of permanent shortages from the head of Britain’s Food and Drink Federation, the Brexit Minister said physical inspections of EU food imports would be delayed from January 2022 to July. The requirement of paperwork to enter the UK, such as Export Health Certificates, would be deferred from October to July.

Frost said the Government is on track to create necessary infrastructure for checks. He did not explain how.

Ardent Brexiteers proclaimed that, with the UK’s departure, the European Union would go into irreversible decline. Some even predicted the break-up on the bloc.

But last Wednesday, less than nine months after the divorce, von der Leyen’s State of the Union was upbeat.. Her description of Europe’s response to the pandemic was an implicit counter to the UK’s self-imposed isolation, including its Northern Ireland dilemma.

We will soon celebrate 30 years of the Single Market. For 30 years it has been the great enabler of progress and prosperity in Europe.

At the outset of the pandemic, we defended it against the pressures of erosion and fragmentation. For our recovery, the Single Market is the driver of good jobs and competitiveness.

She set out a Europe leading in the confrontation of climate change and the implementation of cyber-strategy. A Europe with an alternative to China’s economic system through a “Global Gateway” linking infrastructure, development, and values. Even a European Defence Union might be possible.

Of course, ambition isn’t fulfillment, and the 27 members of the EU might not join hands to complete the journey. But just over a decade after the Eurozone crisis — noted by von der Leyen, “The lessons…should serve as a cautionary tale….We must not repeat the same mistakes” — this was a bold vision of “stronger together”.