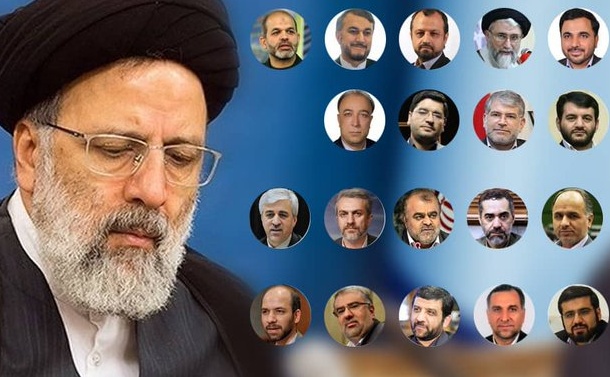 Co-written with Hamidreza Zarifinia, a London-based writer and columnist, and Scott Lucas:

After weeks of speculation, the ministers of Iran President Ebrahim Raisi’s Cabinet were confirmed by the Majlis on August 25.

The outcome was unsurprising, with 18 of 19 nominees approved. Only the choice for Education, Hossein Baghgoli, was rejected.

Far more interesting was what the composition of the Cabinet meant. Would it indicate primary attention to the Coronavirus pandemic? To the years of economic problems, even crisis, plaguing the Islamic Republic? To the issue of corruption, a priority for Raisi as head of judiciary before his selection to lead the Government?

To this complex set of challenges, the answer is simple. This is a Cabinet dedicated first and foremost to “security”, as perceived by the Government and the Supreme Leader, and to the display of power at home and in the region.

This security-first emphasis was already evident in the management of the election by the Supreme Leader’s office. Having stumbled in 2013 when its ban on former President Hashemi Rafsanjani inadvertently led to the surprise victory of centrist Hassan Rouhani, Ayatollah Khamenei’s circle wanted to ensure that there were no mis-steps in 2021.

So Raisi, seen as a reliable hardliner, was backed from the outset of the process. Candidates such as Ali Larijani, the former Parliament Speaker, and ex-President Mahmoud Ahmadinejad were barred, leaving no high-profile alternative. Widespread discontent with the Rouhani Government blunted any centrist campaign, and the reformists had been shattered by years of repression.

But the theocratic system faced a problem beyond Raisi’s easy triumph with 72% of the vote. Battered and resigned by economic difficulties and no prospect of effective participation, only 40% of eligible Iranians showed up. Many ballots were spoiled or left blank.

Thus the choice for a new Government and the Supreme Leader: would the course be “legitimacy” through appeal, offering not only the prospect of recovery but also inclusion, diversity and a genuine widening of the political and social system? Or would it be more of a legitimacy through strength, showing might is the true right in the Islamic Republic?

The response is firm through the Cabinet, rooted in the Revolutionary Guards and judicial hardliners.

The choice of former Defense Minister and Revolutionary Guards commander Ahmad Vahidi leaves no doubt about the course of “internal security”. Not only will Vahidi — wanted by Interpol for his alleged role in a 1994 bombing of a Jewish cultural center in Buenos Aires, Argentina, killing 85 people and injuring hundreds — show the iron fist to dissent, an immediate task in the wake of periodic national protests over the economy and hikes in fuel prices. He has been appointed head of the Supreme National Security Council, and of Iran’s Coronavirus vaccination program.

Less visible but also significant is the arrival of Issa Zarepour as Minister of Information and CommunicaIion Technology. The former head of the judiciary’s IT department, Zarepour holds the keys to Iran’s Internet. He is one of the original architects of the hardline approach to censorship and filtering.

But what of security through economic stability?

The Raisi Government’s approach at this point appears to be an increase in oil revenues, with exports still estimated at only 25% to 50% of the level of 2.5 million barrels per day in early 2018. Part of the effort will be to bypass US sanctions, with little prospect of a short-term breakthrough in the Vienna nuclear talks.

The new Oil Minister, Javad Owji, has been prominent in transactions of gold via Turkey and other neighboring nations to circumvent sanctions. A former Oil Minister, Revolutionary Guards commander Rostam Qassemi, returns to the Cabinet as Roads and Transport Minister — a position no doubt meaning assistance with the logistics of moving goods.

First Vice-President Mohammad Mokhbar Dezfouli offers a different aspect of revenue generation. He is known for his role in seizing Iranian dissident assets valued at more than $50 billion.

However, there is a gap in the Cabinet, with none of the ministers coming through the traditional financial or economic route, in contrast to the emphasis on backgrounds in security and the military.

Which Way For Diplomacy?

Can diplomacy offer a way forward in both a security-first strategy which also deals with the economic challenge?

International attention has been drawn so far to a likely hardline change in tactics in the nuclear talks. The new Foreign Minister Hossein Amir Abdollahian is a sharp contrast to his smiling predecessor Mohammad Javad Zarif, the key Iranian figure in the 2015 agreement. Deputy Foreign Minister Ali Baqeri Kani, who takes over at the Vienna talks from Abbas Araqchi, has denounced the Joint Comprehensive Plan of Action and even falsely claimed that it “was not the Supreme Leader’s decision” to approve it.

The greater significance of Amir Abdollahian’s ascent may lie in his experience as a Deputy Foreign Minister responsible for African and Arab Affairs. In line with Raisi’s inaugural declaration of “smart engagement”, Abdollahian will quickly maneuver for a better relationship with neighboring countries and even with long-time foes such as Saudi Arabia and the UAE.

That tactic has been complemented with Iran’s acceptance into the Shanghai Cooperation Organization, with Asian members such as China and Pakistan. The “look East” agenda has been cemented with the declaration of a 25-year investment deal with China, although it remains to be seen how much of Tehran’s objective of $400 billion will be fulfilled. what progress will be made to Tehran’s declaration of an objection of $400 billion.

Perhaps the greatest import of Amir Abdollahian’s position could be in an assured “security”, even if the economic benefits do not materialize. He has close ties to the Revolutionary Guards, having served as a senior advisor to the late Gen. Qassem Soleimani, the head of the Guards’ Qods Force for operations outside Iran. The Foreign Minister has also been the senior liaison officer between the Iranian Government and regional forces such as Lebanon’s Hezbollah and Palestine’s Hamas and Islamic Jihad.

When Amir Abdollahian was Ambassador to Bahrain, he pursued Tehran’s objectives through close ties with senior Shia cleric Issa Ahmed Qassim, amid the Kingdom’s internal tensions. In that role, he clashed with Saudi Foreign Minister Adel al-Jubeir, with the Iranian almost mocking Riyadh over the future of Bahrain.

That tough-guy posture to diplomacy is a difficult background for Raisi’s hope for “smart engagement”. Indeed, in his first prominent foray as Foreign Minister, Amir Abdollahian ruined Iran’s hope for a positive image at the Baghdad Regional Conference. He drew derision for a charge to the front of the conference picture, refusing to stand next to his Saudi counterpart in the second row.

“Image Is No Solution for Issues”

The Government and the Supreme Leader have reaped an immediate benefit from the perceived setbacks for foes, notably the US withdrawal from Afghanistan and an uncertain American future in Iraq. Headline enemies such as Donald Trump and Benjamin Netanyahu are no longer around. The idea of a post-America region is being further bolstered, at least in publicity, by Iranian accession to the Shanghai Cooperation Organization.

Although the Iranian government will be confident that their largest international barriers in the form of Donald Trump and Benjamin Netanyahu are no longer around, this will no doubt give the Iranians more confidence when dealing with the international arena.

But image abroad, while seeking a positive distraction from issues at home, cannot solve them.

With the vaccine rollout finally underway — albeit in excess of 100,000 lives too late — the major discontent in Iran is with the economy. With inflation still around 40%, no sign of a surge in production, and recurrent protests, the Government is on limited time. Its challenge is compounded by the “brain drain” of the highly-educated young population over the last decade.

The Islamic Republic has shown resilience and tenacity in its 42 years. That message has been significant in encouraging sacrifice and acceptance of difficult conditions, even in recent years.

But with the selection of the Raisi Government, has the system and its Supreme Leader finally cast their lot with “internal security” — shutting down rather than encouraging many Iranians — as the necessary priority?