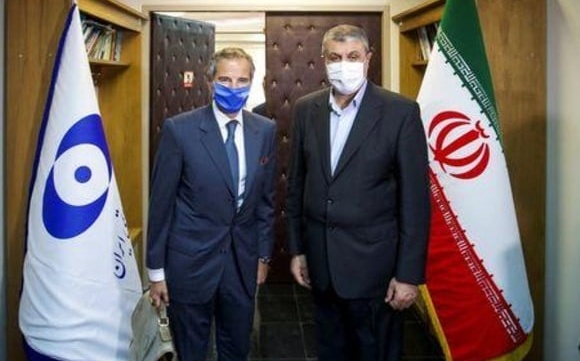 Iran and the International Atomic Energy Agency have announced a limited deal on inspections of nuclear sites.

The arrangements do not renew the inspections agreement which expired in late June. However, they avert a headline confrontation which could have halted the Vienna talks over renewal of the 2015 nuclear accord between Iran and the 5+1 Powers (US, UK, France, Germany, China, and Russia).

The deal was announced on Sunday after IAEA Director-General Rafael Grossi’s discussions in Tehran with the head of the Atomic Energy Organization of Iran, Mohammad Eslami. It grants IAEA staff access to facilities to replace memory cards in monitoring equipment, allowing continued surveillance of the sites.

However, there was no statement about Iran’s withholding of video surveillance tapes and bar on “snap” inspections. Tehran imposed the restrictions early this year as, breaking provisions of the 2015 nuclear deal, it resumed enrichment of 20% uranium and later produced its first 60% fuel.

Grossi said on his return to Vienna on Sunday night:

We managed to rectify the most urgent issue: the imminent loss of knowledge we were confronted with until yesterday. Now we have a solution.

The IAEA’s Board of Governors meets this week. Tehran’s officials had warned that if an “anti-Iran resolution” was adopted, then the Islamic Republic might not return to the Vienna talks.

The recently-installed Raisi Government had already said that it needs “two to three months” before returning to the table.

The Russian Ambassador to the IAEA tweeted on Friday — a day after US envoy Rob Malley visited Moscow:

There should be no illusion. If a draft resolution on #Iran is tabled in the #IAEA Board of Governors Russia will vote against. As I tweeted yesterday there is no need for a resolution which would be not only senseless but extremely detrimental. Let’s better count on diplomacy. https://t.co/XaSzqI9HgC

The immediate dispute concerned monitoring of areas of Iran’s nuclear program, under the 2015 agreement, beyond those supervised under Tehran’s fundamental legal obligations to the IAEA. Those areas included production of parts for uranium centrifuges.

A senior Iranian official told Amwaj Media that the IAEA’s access to the areas, changing the memory cards in cameras, would be “after the Board of Governors meeting”.

He also said the replaced memory cards would not be given to the IAEA, but would be kept under seal on Iranian soil.

But the European Union’s coordinator of the Vienna talks focused on the resumption of the negotiations:

This is a positive step towards ensuring continuity of knowledge on Iran’s nuclear programme. Gives space for diplomacy. I appreciate the efforts. EU’s aim remains full #JCPOA implementation by all. For that it’s crucial we resume #ViennaTalks as soon as possible. https://t.co/0dB9bhtwqy