Biden’s UN Speech for “Relentless Diplomacy” — But Are Others Convinced? 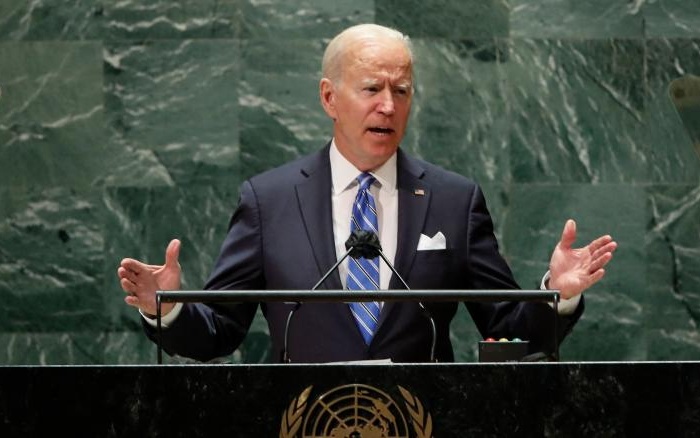 President Joe Biden calls for “relentless diplomacy” in his address to the UN General Assembly, amid the shock to his foreign policy over the US withdrawal from Afghanistan and the backlash over the American agreement with the UK and Australia on nuclear-powered submarines.

Biden spoke for 30 minutes to invoke a new era of global action on issues such as climate change and the Coronavirus pandemic: “Our security, our prosperity and our very freedoms are interconnected, in my view as never before.”

Emphasizing that the US has “shipped more than 160 million doses of Covid-19 vaccine to other countries”, he said, “We need a collective act of science and political will. We need to act now to get shots in arms as fast as possible, and expand access to oxygen, tests, treatments, to save lives around the world.”

Biden asked, “Will we meet the threat of the challenging climate we’re all feeling already ravaging every part of our world with extreme weather, or will we suffer the merciless march of ever worsening droughts and floods, more intense fires and hurricanes, longer heat waves and rising seas?”

He responded that his Administration would double its public international financing for developing nations. The pledge takes the total to $11 billion as part of the global objective of $100 billion by November’s COP26 summit in Glasgow, Scotland.

Which Way in An “Inflection Point in History”?

The President only briefly referred to Afghanistan. Instead, he issued the general proclamation, “We’ve ended 20 years of conflict….US military power must be our tool of last resort, not our first, and it should not be used as an answer to every problem we see around the world.”

Biden asserted that the US is now freer to address the global challenges over climate, the pandemic, and cyber-attacks, with the “relentless diplomacy…using the power of our development aid to invest in new ways of lifting people up around the world”.

He did not mention last week’s Australia-UK-US agreement, which has unsettled other Asia-Pacific countries, riled France, and spurred discussion of an independent European defense bloc.

Biden did not say the word “China”, let alone mention a confrontation between Washington and Beijing. However, he tried to reassure, “We’re not seeking — say it again, we are not seeking — a new Cold War or a world divided into rigid blocs”, while speaking of an “inflection point in history” in which new technologies would be used as “a force to empower people or deepen repression”. He specifically spoke of the fate of Uighurs in western China, with about 1 million held in “re-education camps”.

Without reference to any single country, Biden set up a global choice between democracy and the authoritarian:

Amid the doubts over American commitments, Biden only reinforced his line with a single meeting in New York — with Australian Prime Minister Scott Morrison. On Tuesday evening, he hosted UK Prime Minister Boris Johnson at the White House.

There was no contact with French President Emmanuel Macron, who is in Paris and delivering his address to the UN General Assembly by video. It was unclear if Biden had made any attempt at a conversation.