UPDATE: 100,000s at Risk of Eviction After Supreme Court Decision 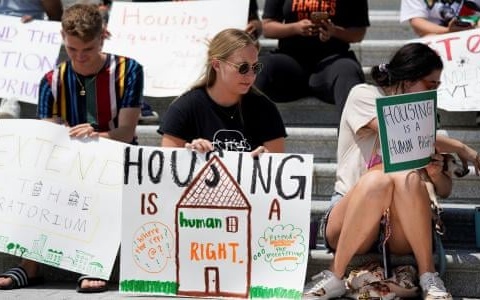 New York is the first state to ensure widespread protections against evictions into 2022, after the Supreme Court blocked a federal moratorium.

The New York bill will cover hundreds of thousands of people at risk amid the Coronavirus pandemic. It extends the moratorium through Jan. 15.

Only five other states and Washington DC currently have eviction moratoriums, and most expire at some point in 2021.

New York State has the highest share of renters in the US, with the large majority in New York City. More than 700,000 households are behind on rent, second to California’s 750,000.

ORIGINAL ENTRY, AUG 27: Hundreds of thousands of Americans are at risk of eviction, following a 6-3 Supreme Court ruling on Thursday.

In an eight-page opinion, the majority barred the Biden Administration’s moratorium on evictions amid the Coronavirus pandemic.

The crisis has arisen because only about $5.1 billion of $46.5 billion in federal aid — part of March’s $1.9 trillion American Rescue Plan — was disbursed by the end of July. State and local bureaucratic delays have limited distribution.

At the start of August, the Centers for Disease Control and Prevention issued a 60-day extension of the eviction moratorium in areas “with high or substantial levels of Coronavirus transmission”.

But the Court majority said the CDC exceeded its authority through “reliance on a decades-old statute that authorizes it to implement measures like fumigation and pest extermination”.

It continued, “It is indisputable that the public has a strong interest in combating the spread of the Covid-19 Delta variant. But our system does not permit agencies to act unlawfully even in pursuit of desirable ends.”

The majority said Congress must authorize any extension.

These questions call for considered decision-making, informed by full briefing and argument. Their answers impact the health of millions. We should not set aside the C.D.C.’s eviction moratorium in this summary proceeding….

The public interest is not favored by the spread of disease or a court’s second-guessing of the CDC’s judgment.

With the Court putting the onus on Congress to act, Rep. Cori Bush of Missouri reacted:

Tonight, the Supreme Court failed to protect the 11 million households across our country from violent eviction in the middle of a deadly global pandemic.

We already know who is going to bear the brunt of this disastrous decision: Black and brown communities, and especially Black women.