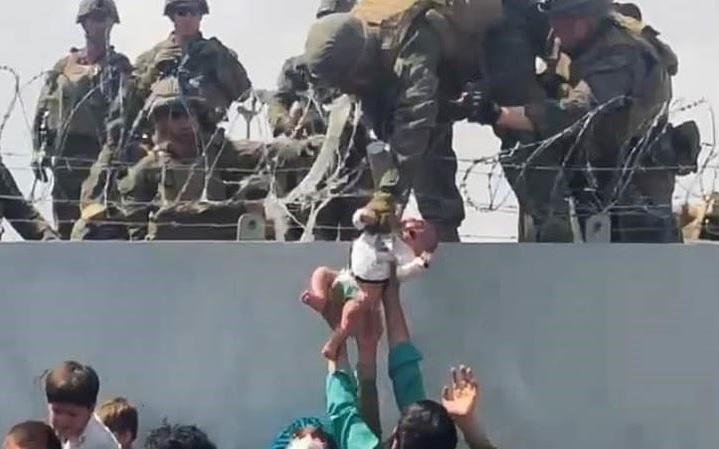 An infant is passed over razor wire to an American soldier at Kabul Airport, Afghanistan, August 2021 (Omar Haidari/Reuters)

I joined talkRADIO’s Claudia-Liza Vanderpuije on Saturday afternoon for a 10-minute chat about the prospect of Taliban rule in Afghanistan, and to criticize the US and UK responses to the situation.

Joe Biden went America First on this. He thinks he can ride out the shock, that Americans will turn away to other concerns by next month.

The 35 million Afghans are expendable in this calculation.

And on the British, with Foreign Secretary Dominic Raab refusing to break his vacation in Crete to call his Afghan counterpart — he delegated the task to a junior minister, and the call was never made.

I also spoke with LBC’s Ian Payne about the domestic reaction to the US withdrawal, anticipated by the Biden Administration.

I think they believe if they can evacuate Americans by Labor Day, the first Monday in September, then they’ll snatch victory from defeat.

It is very much an “America First” approach. It’s just a far bolder and more coordinated approach than Donald Trump could put together.

We also discuss why the Taliban are more effective than the Islamic State, in part because of the endemic weakness of the Afghan Government.

ORIGINAL ENTRY: As part of a 25-minute package on Afghanistan, I joined BBC Radio Scotland to discuss Joe Biden’s “America First” approach: its role in the Taliban’s takeover of power, Biden’s calculation over domestic politics, and the consequences for Afghans and the region.

The other analyst is David Pratt, the foreign affairs editor of The Herald.

The Biden Administration has miscalculated over the region — Afghanistan is not divorced from the rest of Asia.

The second dimension: Biden said six months ago that “America is Back”, trying to project American leadership not just at home but around the world. But this idea has taken a huge hit in an “America First” policy.

Seea also EA on Happs TV: Afghanistan, the Taliban, and Biden
EA on BBC and Times Radio: Taliban in Kabul — Will Biden Pay A Political Price?