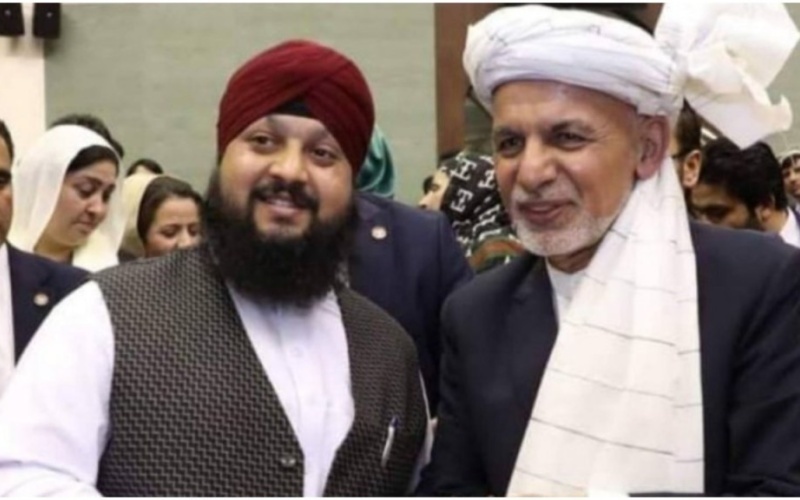 MP Narinder Singh Khalsa, shown with then-Afghanistan President Ashraf Ghani, was one of 72 Afghan Sikhs and Hindus blocked by the Taliban from flying out of Kabul Airport (The World Sikh News)

A second group of Afghan Sikhs is being evacuated on Monday from Kabul via the Tajikstan capital Dushanbe, according to Vikram Sahney, the president of the World Punjabi Organisation.

Sahney says 125 Sikhs are finally being moved out of Afghanistan.

UPDATE, 0800 GMT: A group of 24 Afghan Sikhs and 144 Indians has landed at the Hindon airbase in Uttar Pradesh in India.

US authorities have agreed to operate two flights daily to evacuate the 1000 Indians still in Afghanistan.

We are all safe and have taken refuge at the Gurdwara. We have no further updates on when the group will be evacuated. We are awaiting instructions from the Ministry of External Affairs and the Indian Embassy officials.

ORIGINAL ENTRY: A first group of 24 Afghan Sikhs, initially blocked by Taliban from boarding an evacuation aircraft, finally departed for India on Saturday.

However, another 48 Sikhs and Hindus are in a Kabul gurdwara after they were prevented from exiting on the plane of the Indian Air Force. The Taliban denied their evacuation because they are Afghan citizens.

The group, including Members of Parliament Dr Anarkali Kaur Honaryar and Narinder Singh Khalsa, — had taken refuge in the gurdwara. In a video statement, Honaryar and Khalsa expressed their gratitude to the Indian Government, Prime Minister Narendra Modi, the Indian Air Force, and the Ministry of External Affairs.

Vikramjit Singh Sahney, the president of the World Punjabi Organisation, said the group had waited for more than 12 hours outside the Kabul Airport, hoping to board the evacuation plane:

Taliban fighters stopped them from boarding the IAF plane and said since they are Afghans, they must go back. Now the group has safely returned to Gurdwara Dashmesh Pita Guru Gobind Singhji Karte Parwan in Kabul.”

Sahney said on Twitter page that India reached an agreement with US forces “to operate two flights daily to evacuate stranded Indians, Afghan Sikhs and Hindus”.

Evacuation flight of @IAF_MCC with 168 passengers incl 24 #afghansikhs landing at Hindon base at 10 Am . US agrees 2 flights daily to India to evacuate 1000 indians including 260 afghan sikhs. Efforts by @MEAIndia @DrSJaishankar @M_Lekhi @wpoindia @sunfoundationIn #rehablitation pic.twitter.com/Y97T7sNBhs

Sahney added that the goal is to evacuate 1000 Indians, including 260 members of the Afghan minority community, in a combined operation between the US forces and the Indian Government. Operations are being coordinated by the Government of India, the World Punjabi Organization, and the Delhi Sikh Gurdwara Management Committee.

Sikhs and Hindus have been the targets of gunmen in Afghanistan. In July 2018, 19 Sikhs and Hindus were killed when a convoy was attacked in Jalalabad, and 25 Sikhs were slain at a Kabul gurdwara on March 25, 2020.

In August 2020 a US House resolution, introduced by Rep. Jackie Speier, described Afghanistan’s Sikhs and Hindus as “endangered minorities”. The resolution supported refugee protection for the Afghans as it noted “systematic religious persecution, discrimination, and existential danger faced by the members of these communities”.

Deepa Parent is an author, journalist, and postgraduate at the Clinton Institute, University College Dublin. Formerly, she has worked at Times Television Network and Deccan Chronicle.