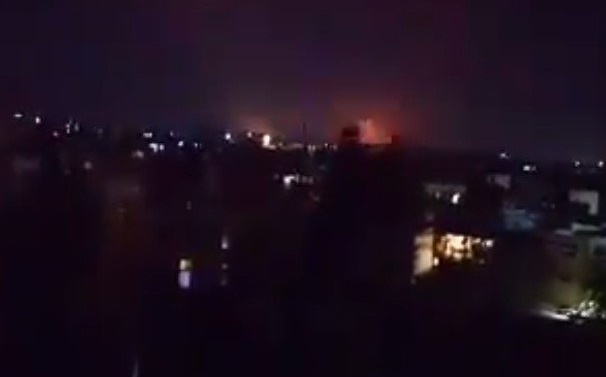 Israel has attacked Assad regime and Iranian positions for the second time in just over 48 hours.

The regime’s military confirmed the missile strikes near al-Qusayr in Homs Province at 1:13 a.m. on Thursday. It issued its standard statement that most of the missiles were downed “and only material damages were reported”.

Videos and photos on social media purported to show explosions from the strikes.

The targets were not confirmed, but al-Qusayr, close to the Lebanon border, was the site of a notable intervention by the Lebanese group Hezbollah in 2013 to check anti-Assad forces and prop up the regime.

ORIGINAL ENTRY, JULY 20: Israel has targeted Assad regime facilities near Aleppo in northern Syria, in the first airstrikes in more than a month.

Safirah is home to a complex of the Scientific Studies Research Center, which develops the regime’s conventional and chemical weapons. The Center’s facilities have been a recurrent target of the Israeli attacks.

Reports also claim that Israel was aiming at Iranian personnel stationed in the area.

No casualties were immediately reported. A regime military spokesman said damage was being assessed.

Throughout Syria’s 124-month conflict, Israel has carried out the strikes, targeting Iran’s links with Lebanon’s Hezbollah and pressuring Tehran to withdraw its forces and foreign militias.

The attacks have escalated since April 2020. Targets have included the regime’s chief conventional and chemical weapons complex, the Scientific Studies Research Center; Damascus International Airport; Iranian personnel and weapons on bases near the capital and in central Syria; and Assad regime posts in southwest Syria near the Israeli-occupied Golan Heights.

In May, a production facility was attacked near the main Russian base at Hmeimim in western Syria.

On June 8, missiles struck Assad regime targets across the country, including near the capital Damascus and the city of Homs.