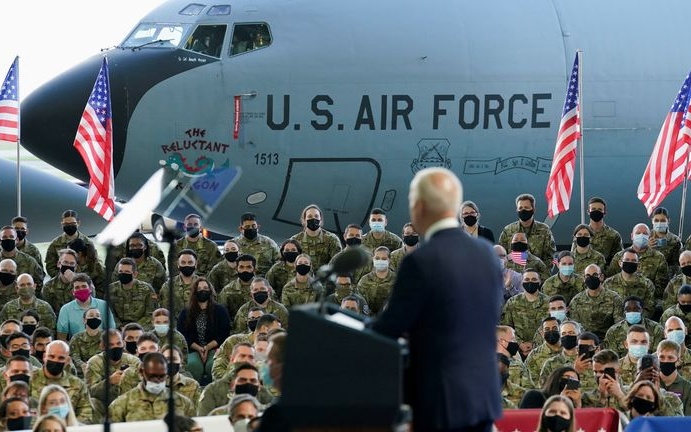 President Joe Biden will announce on Thursday that the US will provide 500 million doses of Coronavirus vaccines to about 100 countries over the next year.

Administration sources told The New York Times that Biden will make the announcement at the G7 summit in the United Kingdom. Biden arrived for the summit on Wednesday night.

The doses will be bought on a no-profit basis from Pfizer-BioNTech, with whom the US Government had already contracted for 300 million doses.

The first 200 million doses will be provided by the end of this year, and the other 300 million by June 2022. They will be delivered through the international vaccine-sharing program Covax.

Biden told US troops in Suffolk, England upon his arrival:

We have to end Covid-19, not just at home, which we’re doing, but everywhere. There’s no wall high enough to keep us safe from this pandemic or the next biological threat we face, and there will be others. It requires coordinated multilateral action.

Biden announced last week that the Administration would distribute 80 million doses to other countries by the end of June, 3/4 of them through Covax. Many of the doses are made by Oxford-AstraZeneca, whose vaccine is approved for use in many countries but not the US.

The World Health Organization estimates 11 billion doses are needed to vaccinate the world. Less than 1% of people in Africa have been fully inoculated, compared with 42% in the US and the UK. Only 5% of people in Central America, with some of the highest death rates in the world, have been vaccinated.

Public health specialists called on the Biden Administration to create conditions, including the transfer of technology for other countries to manufacture vaccines. Peter Maybarduk, the director of Public Citizen’s Access to Medicines, said:

The world needs urgent new manufacturing to produce billions more doses within a year, not just commitments to buy the planned inadequate supply. We have yet to see a plan from the US Government or the G7 of the needed ambition or urgency to make billions more doses and end the pandemic.

Biden supports a waiver of an international intellectual property agreement to remove obstacles to the sharing of technology. But European leaders have objected so far, and pharmaceutical companies are strongly opposed. The World Trade Organization’s Council for Trade-Related Aspects of Intellectual Property Rights is meeting this week to consider the issue.

Almost 1/4 of Pfizer’s revenue — $3.5 billion — from January to March was from its vaccines. The company earned an estimated $900 million in pre-tax profits.