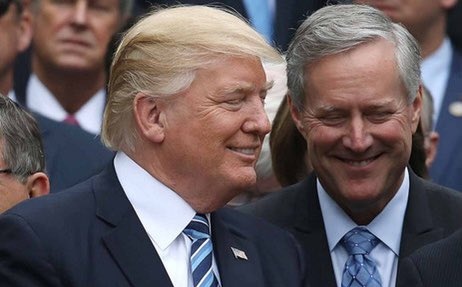 The House Oversight Committee has released the e-mails of White House personnel, including Chief of Staff Mark Meadows, pressuring the Justice Department to overturn the November 2020 Presidential election.

On December 14, the day that the Electoral College formally cast its votes, Meadows urged Deputy Attorney General Rosen to pursue “fraud” in Antrim County, Michigan. The subject line, “From POTUS”, made clear that Meadows was acting on Trump’s instructions.

Michigan State officials had already confirmed that there were no fraud and that an initial error in Antrim County’s count, a result of an incorrect input, had quickly been spotted and corrected on Election Night.

But Meadows maintained, “Cover-up is Happening regarding the voting machines in Michigan….Michigan cannot certify for Biden”.

Trump tweeted 40 minutes later that Rosen was replacing Attorney General William Barr, who had resigned after refusing to pursue a fraud investigation which he said had no basis.

On December 29, Trump aide Molly Michael e-mailed Rosen and his deputies the draft of a legal brief seeking to throw out Pennsylvania’s vote for Biden. She attached a number for the officials to discuss the matter with Trump.

A day later, Meadows called on Rosen to pursue an investigation in Georgia, also won by Biden. “Can you have your team look into these allegations of wrongdoing? Only the alleged fraudulent activity,” Meadows asked, citing allegations over “video issues” and “equipment”.

The e-mail accompanied Trump’s series of phone calls to Georgia officials, including Secretary of State Brad Raffensperger, to declare fraud and “find me the votes” to give him the state’s 16 electors.

The Acting Attorney General replied, “Can you believe this? I am not going to respond to the message below.”

Donoghue indicated there were even more outlandish communications from the Trump camp: “At least it’s better than the last one, but that doesn’t say much.”

ORIGINAL ENTRY, JUNE 6: In their last weeks in office, Donald Trump and his White House Chief of Staff Mark Meadows pressured the Justice Department to overturn the November 2020 Presidential election.

Trump and Meadows pushed Acting Attorney General Jeffrey Rosen to investigate debunked falsehoods and conspiracy theories that the election was stolen from Trump and given to Joe Biden.

The lies included the claims that people in Italy had used military technology and satellites to switch ballots from Trump to Biden.

Rosen never agreed in the e-mail exchange to an inquiry. An e-mail to a Justice Department official indicated that Rosen refused to broker a meeting between the FBI and a man who posted online videos promoting the Italy conspiracy theory.

On December 15, the day after Rosen became Acting Attorney General, Trump summoned him to the White House to demand support of his attorneys’ lawsuits. Mr. Trump pressed Rosen to appoint a special counsel to investigate Dominion Voting Systems, accused by Trump’s lawyers and conspiracy theorists of fraud in the decisive states in the election.

After Rosen rebuffed Meadows, Trump plotted to fire him and install a replacement, Jeffrey Clark, who would declare electoral fraud. The scheme was blocked when the Justice Department’s top officials threatened to resign en masse.

“Find Me the Votes”

Trump’s plot came as he was phoning Georgia officials, including Governor Brian Kemp and Secretary of State Brad Raffensperger, to demand that the state legislature dismiss the vote and appoint Trump electors for the Electoral College vote on December 14.

Just before Christmas, as Trump called Raffensperger’s lead investigator to demand a finding of “dishonesty”, Meadows made a surprise visit to Georgia’s Cobb County to view an election audit. Local officials called it a stunt that “smelled of desperation”.

Meadows joined the January 2 call in which Trump told Raffensperger “to find 11,780 votes” — one more than Biden’s victory in Georgia.

The e-mails about Trump and Meadows’ pressure were found in a Senate Judiciary Committee investigation about any involvement of Justice Department officials in the attempts to overturn the election. The inquiry was prompted by The New York Times’ revelation of the Trump plot to replace Rosen with Clark, who had told Trump that fraud had affected the election’s outcome.

Rosen is in talks with the Committee and the Justice Department about testifying.