India’s Modi Rallies As His People Die From Coronavirus 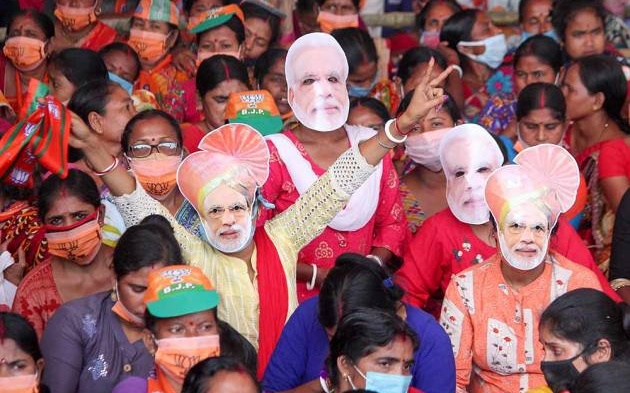 A crowd at a rally for Prime Minister Narendra Modi in West Bengal, India, April 17, 2021

Indian Prime Minister Narendra Modi often claims he is the first or a trendsetter in many aspects of life. But he won’t claim for launching the second, deadly wave of the Coronavirus pandemic surging throughout the country.

Maybe it was Modi’s political rallies in key electoral states or permission for the Kumbh Mela Festival to proceed with no social distancing measures. Maybe it is the failure to create an adequate health system, to deliver an efficient vaccine rollout, or to stockpile medical equipment. The outcome is certain: like his fellow populists Donald Trump and Boris Johnson, Modi is presiding over a crisis which has been a result of inept leadership and short-term steps for his political position rather than the nation’s health.

On Friday, India registered 401,993 new cases, extending its global record for daily infections. More than 300,000 cases have been registered on each day since April 21, taking the total to more than 18.8 million.

The rise in the death toll is even starker. On March 3, 89 fatalities were recorded. On Wednesday, the number was 3,645. The overall total has soared to more than 212,000.

On Friday, the Delhi High Court was unsparing. This is a “complete failure” of the central government.

So what happened to put those in the world’s second-most populous country — 1.38 billion — at risk?

Dr Navjot Dahiya, the National Vice President of the Indian Medical Association, looks back to the breakout of the pandemic in January 2020. India was spared much of the global damage in the first wave. Modi downplayed the threat and was busy organizing rallies, in part because of the visit of Donald Trump.

Dahiya explains, “While the medical fraternity is trying hard to make people understand mandatory Covid-19 norms, PM Modi did not hesitate to address big political rallies, tossing all Covid-19 norms in the air.”

While some Indians were frantically looking for adequate health care, oxygen cylinders, and ventilators as hospitals were overcrowded and exhausted, hundreds of thousands of Hindu devotees flocked to the Kumbh Mela festival. Modi staged his rallies for more thousands, unencumbered by masks or distancing.

The Prime Minister downplayed the violations of protocols at Kumbh Mela even as he said that the celebrations should be held as a “symbolic event”. A week later in West Bengal, Modi and his Union Home Minister Amit Shah appeared at a gigantic rally. Only then did the Election Commission ban all road shows and limited gatherings to 500 people.

Now the rich have access to oxygen and the not-so-rich don’t. In Delhi, people are dying at home because of a shortage of hospital beds. In Modi’s home state of Gujarat, crematoriums and graveyards are overwhelmed by the dead.

Rather than preparing for a second wave, the Government focused on vaccinations. But the campaign has only reached 9% of India’s 1.28 billion people, and most who are inoculated are the haves rather than the have nots.

Still, Modi and his ministers congratulated themselves that the pandemic was in its “end game”. In February, the ruling BJP passed a resolution:

It can be said with pride, India…defeated Covid-19 under the able, sensible, committed and visionary leadership of Prime Minister Modi….The party unequivocally hails its leadership for introducing India to the world as a proud and victorious nation in the fight against COVID.

The Government devoted its efforts to a PR campaign for the Prime Minister, even erecting sponsored billboards in Canada thanking Modi for exporting Indian-made vaccines — as the same government failed to deal with vaccine hesitancy and apprehensions about efficacy.

India is the world’s largest manufacturer of vaccines of all sorts, but the Modi government was too arrogant and too slow to place orders from local producers as it slowed the approval of proven foreign vaccines. Officials downgraded India in March from a free democracy to a “partially free democracy. Social media platforms, including Facebook and Twitter, have been accused of blocking the hashtag #ResignModi, hiding more than 12,000 posts critical of the Government and deleting tweets critical of Modi’s handling of the pandemic after the Government’s legal request. Sweden’s V-Dem Institute assessed that India has become an “electoral autocracy” and a “flawed democracy.”

People in many countries have paid the ultimate price for inept leadership during the pandemic, but in an India where 65% live in rural areas, millions live in poverty, and the welfare state is more or less defunct, the cost may be highest.

In what may be India’s biggest crisis since partition in 1947, Modi’s image may have been dented. It is hard to be the strong man when the projection of your country’s self-confidence has collapsed. But as with all populist leaders whose weaknesses to govern have been exposed by Covid-19, it is the people they supposedly represent who pay the price.