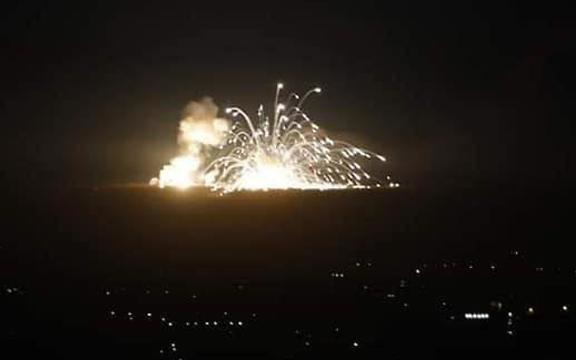 State news agency SANA reported that helicopters attacked near Quneitra in the Golan Heights early Friday. It claimed that there were no injuries or damage.

However, a pro-opposition activist reports that a captain in the Assad regime’s military was killed.

A pro-opposition activist notes that Tuesday night’s strikes were only 8 km (5 miles) from Russia’s main military position in Syria, the Hmeimim airbase.

A local source tells EA, “When they bomb a place that close to the main Russian base, the target must be important. Spoiler: it is not a plastic manufacturing plant.”

ORIGINAL ENTRY, MAY 5: Israel’s warplanes have reportedly carried out their latest strikes inside Syria, hitting targets in the coastal region in the west of the country.

Assad regime media said one person was killed and six wounded, claiming a “plastics factory” in Latakia Province was hit late Tuesday. The military added its template declaration that most of the Israeli missiles were downed.

Israel has periodically struck arms depots and facilities connected to weapons production throughout Syria, including in the west.

The Israel Defense Forces, following standard practice, did not comment.

The strike was the first since April 22, when an errant Syrian surface-to-air missile exploded in the air about 20 miles from Israel’s Dimona nuclear complex.

The attacks have escalated since last April. Targets have included the regime’s chief conventional and chemical weapons complex, the Scientific Studies Research Center; Damascus International Airport; Iranian personnel and weapons on bases near the capital and in central Syria; and Assad regime posts in southwest Syria near the Israeli-occupied Golan Heights.