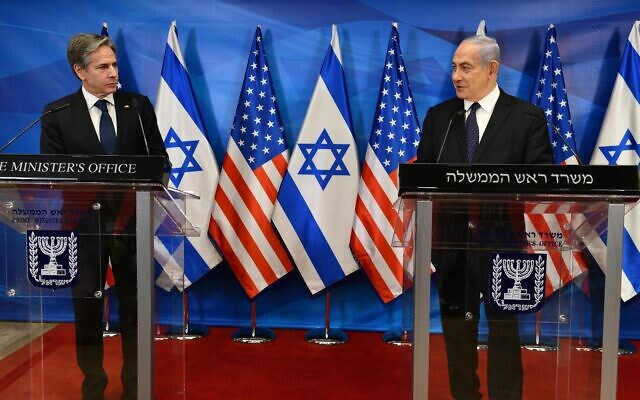 In talks in Israel and Palestine’s West Bank, US Secretary of State Antony Blinken pursues the reconstruction of Gaza.

But Israeli Prime Minister Benjamin Netanyahu brushes aside the initiative by focusing — and/or diverting — on Iran.

Tuesday’s encounter illustrated the challenge that the Biden Administration faces after it publicly supported Israel’s attacks on Gaza throughout much of the 11 days of killing before last Friday’s ceasefire.

Blinken amplified President Joe Biden’s post-ceasefire emphasis that “the Palestinians and Israelis equally deserve to live safely and securely”. He promoted reconstruction after an estimated $100 million of damage in Gaza, with more than 1,800 residential and commercial units destroyed or rendered uninhabitable and most residents losing access to clean water and electricity.

Speaking alongside Netanyahu in Jerusalem, Blinken said “leaders on both sides” must take steps “to set a better course for their shared future”.

We know that to prevent a return to violence we have to use the space created [by the ceasefire] to address a larger set of underlying issues and challenges, and that begins with tackling the grave humanitarian situation in Gaza and starting to rebuild.

The Secretary of State also cited the need to address issue for “greater stability and reduced tensions in the West Bank and Jerusalem”.

But Netanyahu preferred to focus on Blinken’s repetition of “the commitment of the United States to Israel’s security” and reference to “Iran’s destabilizing actions in the region” amid talks in Vienna about the 2015 nuclear agreement.

I hope that the United States will not go back to the old JCPOA [Joint Comprehensive Plan of Action]. We believe that that deal paves the way for Iran to have an arsenal of nuclear weapons with international legitimacy.

Whatever happens. Israel will always reserve the right to defend itself against a regime committed to our destruction, committed to getting the weapons of mass destruction for that end.”

See also EA on Monocle 24: Is Biden Administration Shifting US Line on Palestine and Israel?

The Prime Minister, in legal trouble and unable to establish a mandate to govern after four elections in two years, also grasped the Biden Administration’s exclusion of the “terrorist” Gazan leadership of Hamas from reconstruction and any political talks.

Blinken had repeated Biden’s refusal to include Hamas, which has governed Gaza since 2007. He spoke of “the thousands of rockets fired by Hamas indiscriminately against Israeli civilians….For the President… this commitment is personal; it runs deep.”

He declared that the US would work with partners “to ensure that Hamas does not benefit from the reconstruction assistance”.

Netanyahu used Blinken’s presentation of Hamas to further emphasize possible conflict rather than reconstruction: “If Hamas breaks the calm and attacks Israel, our response will be very powerful….[We] discussed ways to work together to prevent Hamas rearmament.”

The office of Foreign Minister Gabi Ashkenazi asserted after his meeting with Blinken: “The rehabilitation of the Gaza Strip cannot occur without a joint mechanism for supervision and enforcement that will prevent the strengthening of the Hamas terrorist organization.”

1/2
A very important meeting with @SecBlinken & his team.
we discussed the aftermath of operation "Guardian of the Walls" & the importance of our relations with the #US.
We spoke in detail about regional issues & the importance of strengthening & expanding the circle of peace. pic.twitter.com/FWnBuMiubE

Defense Minister Benny Gantz told Blinke of Israeli preconditions: the return of Israeli captives and the remains of two soldiers from Gaza and the bolstering of the PA by “damaging the military power of Gazan terror groups”.

The Biden Administration has not explained how reconstruction will occur with Hamas ostracized. Instead, Blinken issued the general declaration yesterday, “We need to work to expand opportunity for Palestinians in Gaza and in the West Bank, including by strengthening the private sector, expanding trade and investment, and other means.”

A Meeting in Ramallah

He said the Biden Administration will ask Congress for $75 million in aid for Palestinians, including $5.5 million in immediate assistance for Gazan reconstruction. The package includes 1.5 million doses of Coronavirus vaccines.

Blinken did not give a timetable for the reopening of the US mission, which may need permission from Israeli authorities.

We’re just beginning the process….But I can tell you that it’s, I think, important to have that platform to be able to more effectively engage [with] not just the Palestinian Authority, but Palestinians from different walks of life, the NGO community, the business community, and others.

Abbas and the Palestinian Authority have had no role in Gaza’s governance since 2007, and their oversight of the West Bank is facing challenges from other factions and many residents.

Last month Abbas called off the first Palestinian elections in 15 years, amid the possibility that his Fatah Party would be defeated.

Alongside Blinken, he thanked the US “for its commitment to the two-state solution [and maintaining] the status quo on the Haram al-Sharif (Temple Mount),” the Jerusalem site among the holiest for Muslims, Jews, and Christians.

A crackdown by Israeli security forces on gatherings at the site, including sweeps through the Al-Aqsa Mosque and detention of hundreds of Palestinians, was among the proximate causes of this month’s killings.

At least 253 Gazans, including 66 children, were killed and more than 1,500 wounded. Twelve Israelis were killed or died while fleeing Hamas rocket fire.