UPDATED: Cheney — Republican Party Is At A Turning Point 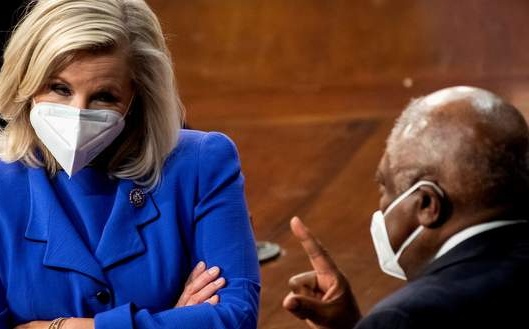 In a Sunday morning interview with Fox TV, derided Cheney without mentioning her by name: “Any member can take whatever position they believe in….What we’re talking about is a position in leadership. As conference chair, you have one of the most critical jobs as a messenger going forward.”

Trumpists have demanded Cheney’s removal over her vote to impeach Trump for his incitement of the January 6 attack on the US Capitol and his disinformation about the 2020 US election.

In contrast, Stefanik has loudly backed Trump’s falsehoods, before and during her campaign to replace Cheney.

A vote for the replacement could come during a meeting of the Republican House conference on Wednesday.

— The Republican Accountability Project (@AccountableGOP) May 6, 2021

ORIGINAL ENTRY, MAY 6: Rep. Liz Cheney, under fire from Trumpists over her criticism of Donald Trump and his instigation of the January 6 attack on the US Capitol, warns that the Republican Party is a turning point.

Noting Trump’s latest disinformation about a “stolen election” last November, Cheney wrote in The Washington Post on Wednesday, “Republicans must decide whether we are going to choose truth and fidelity to the Constitution.”

I am a conservative Republican, and the most conservative of conservative values is reverence for the rule of law. Each of us swears an oath before God to uphold our Constitution. The electoral college has spoken. More than 60 state and federal courts, including multiple Trump-appointed judges, have rejected the former president’s arguments, and refused to overturn election results. That is the rule of law; that is our constitutional system for resolving claims of election fraud.

The question before us now is whether we will join Trump’s crusade to delegitimize and undo the legal outcome of the 2020 election, with all the consequences that might have.

The opinion piece follows up Cheney’s weekend tweet, “The 2020 presidential election was not stolen. Anyone who claims it was is spreading THE BIG LIE, turning their back on the rule of law, and poisoning our democratic system.”

That message was a response to Trump’s snipe that the 2020 election “will be, from this day forth, known as THE BIG LIE!”

Far from supporting Cheney, the 3rd-ranking Republican in the House, Minority Leader Kevin McCarthy threw his weight behind efforts to strip her of her role, telling Fox TV, “I think she’s got real problems. I’ve had it with her. I’ve lost confidence.”

Cheney noted tersely that McCarthy, who said on the House floor on January 13 that Trump “bears responsibility” for the Capitol attack, “has changed his story”.

She refused to back down, writing that she is committed to “defend the basic principles that underpin and protect our freedom and our democratic process…no matter what the short-term political consequences might be”.

The Wyoming representative called for support of the Justice Department criminal investigation of the attack, and for bipartisan support of an independent commission: “This is critical to defeat the misinformation and nonsense circulating in the press and on social media.”

McCarthy and other Republican legislators have tried to divert from the commission’s focus by insisting on a mandate that includes Black Lives Matter marches and the specter of the anti-fascist group “Antifa”.

Cheney added, “We Republicans need to stand for genuinely conservative principles, and steer away from the dangerous and anti-democratic Trump cult of personality.”

Senior Republicans came out on Wednesday for Rep. Elise Stefanik, a public backer of Trump’s disinformation, to take over Cheney’s role as the GOP House conference chair.

House Republicans need to be solely focused on taking back the House in 2022 and fighting against Speaker Pelosi and President Biden’s radical socialist agenda. Elise Stefanik is strongly committed to doing that, which is why Whip Scalise has pledged to support her for conference chair.

Trump sneered that Cheney is a “warmongering fool” and proclaimed, “Elise is a tough and smart communicator!”

Minutes later, Stefanik posted a tweet of Trump’s remarks after he escaped impeachment conviction in January and added, “I am forever grateful for the support from President Donald J. Trump to work together to #FIREPelosi and retake the House!”

Sens. Susan Collins and Mitt Romney have backed Cheney, but Senate Minority Leader Mitch McConnell refused to do so on Wednesday. He repeatedly replied to questions, “One hundred percent of my focus is on stopping this administration.”

President Joe Biden commented, “We badly need a Republican Party. We need a two-party system. It’s not healthy to have a one-party system.”