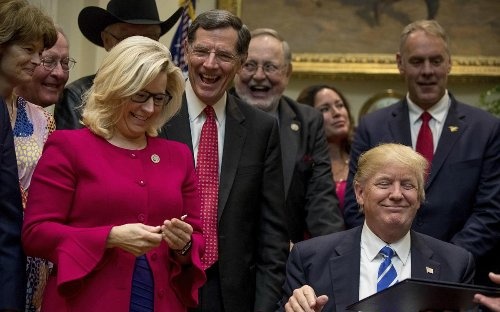 House Minority Leader Kevin McCarthy has threatened the removal of Rep. Liz Cheney from her role as 3rd-ranking GOP Representative.

I have heard from members concerned about her ability to carry out the job as conference chair, to carry out the message. We all need to be working as one, if we’re able to win the majority.

Before the interview, McCarthy was caught on an open microphone telling a Fox reporter, “I think she’s got real problems. I’ve had it with her. I’ve lost confidence.”

Cheney refused to back down over her criticism of Donald Trump and the response to the January 6 attack on the US Capitol. Spokesman Jeremy Adler said, “This is about whether the Republican Party is going to perpetuate lies about the 2020 election and attempt to whitewash what happened on January 6. Liz will not do that. That is the issue.”

Every person of conscience draws a line beyond which they will not go: Liz Cheney refuses to lie. As one of my Republican Senate colleagues said to me following my impeachment vote: “I wouldn’t want to be a member of a group that punished someone for following their conscience.”

ORIGINAL ENTRY, MAY 4: Rep. Liz Cheney, the third-ranking Republican in the House of Representatives, calls out Donald Trump over his disinformation and falsehoods about the 2020 Presidential election.

Defying attempts by the US Congressional leadership to curb her statements — and risking the wrath of Trumpists trying to remove her from office — Cheney tweeted on Monday:

The 2020 presidential election was not stolen. Anyone who claims it was is spreading THE BIG LIE, turning their back on the rule of law, and poisoning our democratic system.

Cheney was responding to a Trump statement, issued less than an hour earlier by his Save American PAC, that the election won by President Joe Biden “will be, from this day forth, known as THE BIG LIE!”

The Wyoming legislator was one of 10 GOP Representatives to vote for Trump’s impeachment after the January 6 attack on the US Capitol, instigated by his invocation — including a speech outside the White House just before the assault — of “Stop the Steal”.

See also Cheney on Trump: “Gravest Violation of His Oath of Office by Any President in US History”

The Wyoming Republican Party tried to censure their representative.

Last week Cheney said that anyone denying the Electoral College results should be disqualified from seeking the 2024 GOP Presidential nomination.

Politico reported on Monday about a “coordinated effort” by House Minority Leader McCarthy to “box [Cheney] out”. The site claimed that he “is signaling that if anyone wants to try to force another vote to oust her from [her] post, he’s not planning to defend her anymore”.

McCarthy refused to appear with Cheney at press conferences for months. He reportedly blocked her from any moderating role in a recent GOP retreat in Orlando, Florida.

A poll by CNN last week indicated that 70% of Republicans still do not accept President Biden’s victory. In Arizona, Trumpists have insisted on another audit of the ballots.

On Sunday, Cindy McCain — widow of the late Sen. John McCain, the 2008 Republican nominee for President — said the audit was a “ludicrous” attempt to undermine the result.