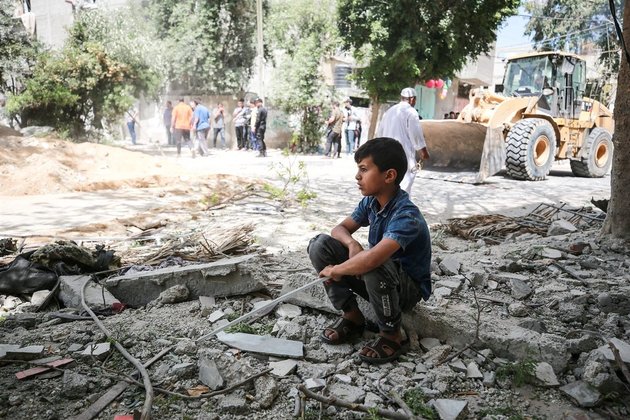 A boy watches search and rescue efforts in buildings destroyed by Israeli airstrikes on the Jabalia Refugee Camp, Gaza City, May 17, 2021 (Mustafa Hassona/Anadolu/Getty)

Secretary of State Antony Blinken repeats the Biden Administration’s support for aid to reconstruct Gaza after the extensive damage by Israeli missiles and shelling in the conflict paused on Friday.

In interviews with Sunday political TV programs, Blinken also reiterated the Administration’s backing of “Israel’s right to defend itself”.

Initially, the Biden Administration held out publicly against a call for ceasefire in the 11 days of killings, with almost 250 Gazans slain and 12 Israelis perishing from Hamas rocket fire.

But last Wednesday, Biden called on Israeli Prime Minister Benjamin Netanyahu to de-escalate, and the ceasefire — which included Egypt as a broker with both sides — followed at 2 a.m. local time on Friday.

In a statement just after the pause, Biden looked towards an international initiative for the reconstruction of Gaza, despite an Israeli blockade of the territory since Hamas took power in 2007.

Blinken told ABC News on Sunday that “it was critical to get to the ceasefire” for “a pivot to building something more positive”.

That has to start now with dealing with the grave humanitarian situation in Gaza. Then reconstruction, rebuilding what’s been lost. And critically, engaging both sides in trying to start to make real improvements in the lives of people so that Israelis and Palestinians can live with equal measures of security, of peace and dignity.

Interviewer George Stephanopoulos noted that it was “new” for an Administration to emphasize the word “equal” with respect to rights for Palestinians as well as Israelis.

Without acknowledging the shift, Blinken said, “It’s vitally important that Palestinians feel hope and have opportunity, and can live in security just as it is for Israelis, and there should be equal measures.”

Administration v. Some Democrats Over Arms to Israel

The Secretary of State maintained Biden’s line on Friday that “the United States fully supports Israel’s right to defend itself against indiscriminate rocket attacks from Hamas and other Gaza-based terrorist groups”.

That was an implicit rejection of the effort by some Democrats in the Senate to suspend US military aid to Israel.

Blinken stepped away from an explicit statement: “One of the things I don’t do in this job is I don’t do politics. I focus on the policies. So I’ll leave the politics to others.” But he continued, “Any arms sale is going to be done in full consultation with Congress, we’re committed to that. And we want to make sure that that process works effectively.”

Sen. Bernie Sanders, a leading Democratic Presidential candidate in 2016 and 2020, introduced a resolution to block a $735 million sale. The proposal is the first of its kind in the chamber. It follows calls from House Democrats such as Rep. Rashida Tlaib, the first Palestinian-American in Congress, for the suspension.

Blinken maintained the Administration’s refusal of any contact with Hamas, let alone cooperation for reconstruction with the Gazan leadership. He said the White House will rely on “trusted, independent parties that can help do the reconstruction and the development, not some quasi-government authority…[which] has brought nothing but ruin to the Palestinian people”.

You have a very difficult situation. You have Hamas, a terrorist group. You have a right-wing Israeli government, and the situation is getting worse.

And all that I’m saying is that the United States of America has got to be leading the world in bringing people together, not simply supplying weapons to kill children in Gaza.