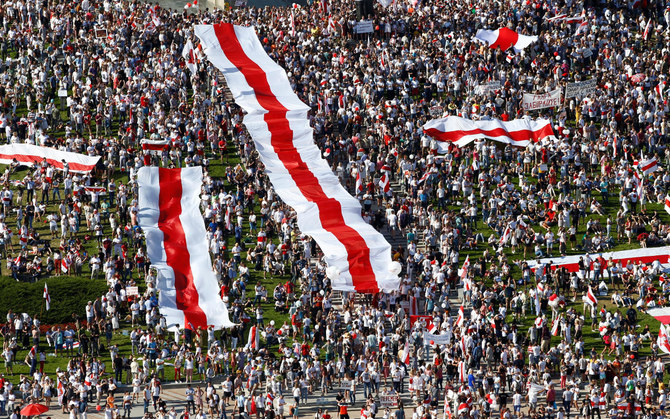 Belarusian authorities have detained leading opposition activist Roman Protaseviceh after diverting a RyanAir flight and forcing it to land in Minsk.

Protasevich is a co-founder of the Telegram messaging application’s Nexta channel, labelled as “extremist” after it was involved in organization of mass protests against Belarus leader Alexander Lukashenko.

His flight was diverted by an alleged bomb threat. Lukashenko personally ordered a MiG-29 fighter jet to bring the Ryanair plane, en route from Athens to Lithuania’s capital Vilnius, to the Minsk airport.

Protasevich, who has been living in Poland, faces charges with a prison sentence of up to 15 years.

ORIGINAL ENTRY, MARCH 2: Mass protests in Belarus are in their eighth month after the disputed election of President Alexander Lukashenko to a sixth term.

The marches for rights and reforms persist despite the crackdown by Lukashenko’s security forces, but will they bring political change?

5:20: What is the significance not just of President Lukashenko but of an authoritarian system, 30 years after the break from the Soviet Union?

8:35: What are the concerns of people inside Belarus beyond Lukashenko?

18:51: Have the protests ebbed because of a passive “Let’s just all live and let live” attitude?

23:00: Is the latest crackdown a sign from the Lukashenko regime aof confidence that they have a handle on this? Or does it actually portray uncertainty?

31:10: Is there any leverage for the United States and the EU in this situation?