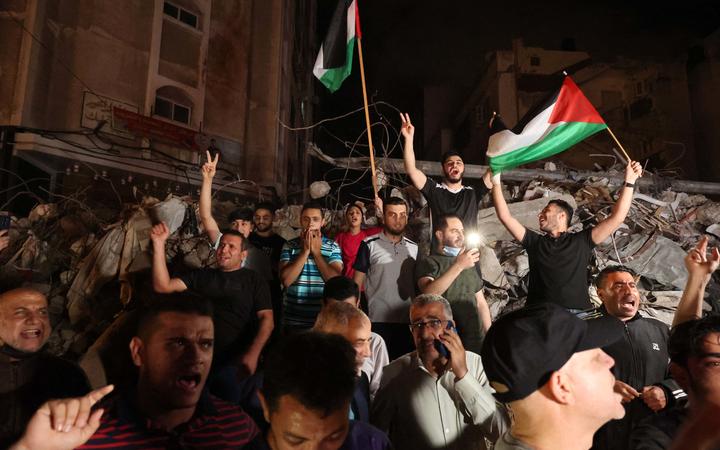 Gazans celebrate a ceasefire after 11 days of killings in the Israel-Gaza conflict, May 21, 2021 (Mohammed Abed/AFP)

US President Joe Biden hails a ceasefire between the Israeli Government and the Gazan leadership, and looked towards an international initiative to rebuild Gaza.

Biden spoke after the ceasefire went into effect at 2 a.m. local time, following 12 days of Israeli attacks that killed at least 232 Palestinians — including at least 65 children — and Hamas rocket fire that killed or led to the deaths of 12 Israelis, including two children.

The President said, “I believe the Palestinians and Israelis equally deserve to live safely and securely, and to enjoy equal measures of freedom, prosperity and democracy.”

He repeated his assurance to Israeli Prime Minister Benjamin Netanyahu, “The United States fully supports Israel’s right to defend itself against indiscriminate rocket attacks from Hamas and other Gaza-based terrorist groups that have taken the lives of innocent civilians in Israel.”

Biden did not refer directly to the Israeli missiles and shelling.

The Biden Administration had a shifting public position during the conflict. Initially, it called for the security of both Israelis and Palestinians. Then, in the repeated blocking of a UN Security Council statement and in Biden phone calls to Netanyahu, the Administration supported the Israeli attacks as “self-defense” which was not “significantly disproportionate” against the “terrorists” of Hamas.

Biden shifted position on Wednesday, telling Netanyahu that must be an immediate de-escalation of the Israeli strikes. The attacks continued for another 24 hours until the announcement of the imminent ceasefire late Thursday.

A “senior Biden Administration official” said the US intends to lead an international initiative, costing billions of dollars, which will restore health and education services and support reconstruction.

Biden emphasized, “We will do this through full partnership with the Palestinian Authority” — which governs in the West Bank — “not Hamas in a manner that does not permit Hamas to simply restock its military arsenal.”

The senior official indicated that the US will join other efforts, likely through the UN, addressing long-term Israel-Palestine issues. These might include Jewish Israeli settlements in the occupied Palestinian West Bank, and reconciliation between rival Palestinian factions such as the Palestinian Authority — which governs in the West Bank — and Hamas.

This month’s conflict was fostered by Israel’s eviction of Palestinian families from homes in the Sheikh Jarrah neighborhood of East Jerusalem. Israeli security forces then tried to restrict Palestinian gatherings and protests, during Ramadan, across the West Bank. Clashes followed on Temple Mount — a holy site for Islam, Judaism, and Christianity — with Israeli forces entering the al-Aqsa Mosque and detaining hundreds of Palestinians.

Biden’s statement did not address those proximate causes.

Will There Be Reconstruction This Time?

The White House focus last month was the reversal of the Trump Administration’s ban on US contributions to the United Nations Relief and Works Agency, which coordinates humanitarian aid for more than 5.7 million Palestinian refugees across the Middle East.

The State Department committed $150 million. Elizabeth Campbell, the director of the UNRWA office in Washington, said a second installment of about $150 million is expected later this summer.

The Administration also committed $75 million for economic development programs and $10 million for “peace-building operations” in the West Bank and Gaza.

A reconstruction effort after the 2014 Israel-Gaza conflict — in which more than 1,500 Palestinians were killed, more than 170,000 homes damaged, and more than 25% of 2 million Gazans displaced — failed because of opposition by Israel and Egypt to Hamas. Most international pledges of aid, notably by Arab States, were unfulfilled.

Israel has maintained restrictions on Gaza since the 1990s and bolstered the blockade in 2007 after Hamas took power in elections and a brief civil war with its rival Fatah.

Many Gazans have remained in temporary housing — a situation exacerbated by the destruction of homes and the displacement of more than 70,000 people in the past 12 days — faced soaring unemployment, and endured reduced electricity, clean water, and waste management.