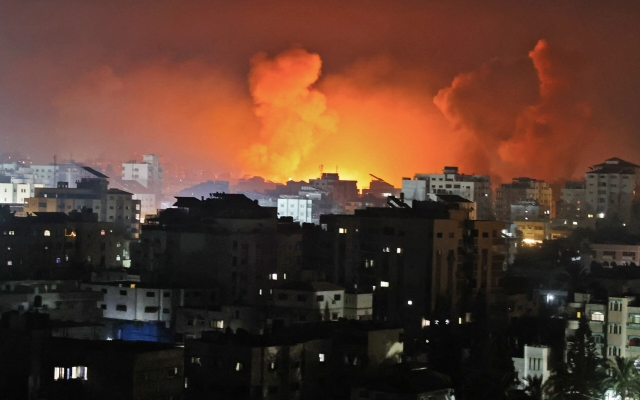 Fire erupts from the Andalus Tower as it is destroyed by Israeli air raids on Gaza City, May 16, 2021 (Mohammed Abed/AFP)

Ocasio-Cortez tweeted, “Apartheid states are not democracies.” She continued:

This is happening with the support of the United States.

I don’t care how any spokesperson tries to spin this. The US vetoed the UN call for ceasefire.

How can they credibly claim to stand for human rights? https://t.co/bXY99O3Wqp

In a phone call to Israeli Prime Minister Benjamin Netanyahu, Biden labelled the Hamas leadership in Gaza “terrorist”. A White House readout summarized, “The President reaffirmed his strong support for Israel’s right to defend itself against rocket attacks from Hamas and other terrorist groups in Gaza.”

After the call, Netanyahu said the bombing from the air, ground, and sea will continue:

You know and I know: No country would tolerate this. Israel has responded forcefully to these attacks, and we will continue to respond forcefully until the security of our people is reinstated and restored.

Among the latest towers in Gaza to be destroyed was a high-rise of offices and residences that included media outlets such as Al Jazeera and the Associated Press. Strikes before dawn on Sunday damaged a main road to Shifa Hospital, the largest in Gaza, and the home of Yehya Sinwar, the leader of Hamas.

The escalation comes hours after Israeli missiles hit a refugee camp, killing at least 10 Palestinians, including eight children – and brought down a high-rise building housing the offices of media organisations, including Al Jazeera.

Volleys of rockets were fired from Gaza into southern and central Israel early Sunday. No injuries were reported.

At least 10 people in Israel have been killed by Hamas rocket fire, or died from injuries while fleeing the barrage.

In the call to Netanyahu, Biden cited the “conflict which has tragically claimed the lives of Israeli and Palestinian civilians, including children”. He “raised concerns about the safety and security of journalists and reinforced the need to ensure their protection”.

See also EA on BBC: Is There An International Path Out of Gaza-Israel Killings?

The President also called Mahmoud Abbas, the leader of the Palestinian Authority in the West Bank. The White House said, “They expressed their shared concern that innocent civilians, including children, have tragically lost their lives amidst the ongoing violence.”

However, while Biden “stressed the need for Hamas to cease firing rockets into Israel”, the readout did not explicitly call out Israeli attacks.

The US Government has no direct contacts with Hamas, which has ruled in Gaza since elections in 2007 and a brief armed battle with its Palestinian rival, Abbas’s Fatah Party.

Last night, an MSF clinic in #Gaza where we provide trauma and burn treatment was damaged by Israeli aerial bombardment, leaving a sterilization room unusable and a waiting area damaged. No one was injured in our clinic, but people were killed by the bombing. pic.twitter.com/Dwol0EPXEr

An Escalation of Killing

The current killings rest on weeks of tension that began with the attempts by Israeli authorities to evict Palestinian families in East Jerusalem, freeing the residences for Jewish settlers.

Israeli security forces tried to prevent protests, citing Coronavirus restrictions, as well as gatherings for Ramadan. Just over a week ago, clashes erupted on Temple Mount — a holy area to Muslims, Jews, and Christians — with hundreds of Palestinians injured.

Hamas has fired hundreds of rockets into Israel, including the first notable launch on Jerusalem. Israel responded with the missile strikes.

There has also been violence between Jewish and Arab Israeli communities, notably in the city of Lod, which has spread across northern Israel.

On Saturday, there were demonstrations across the West Bank to mark Nakba Day, the commemoration of the displacement of hundreds of thousands of Palestinians from their homes and property during the Arab-Israeli War in 1948.

Biden: “No Significant Overreaction” by Israel

Biden’s envoy Hady Amr arrived in Israel on Saturday to join efforts by Egyptian and Qatari officials for a ceasefire. He is expected to stay for two days of talks with Israeli and Arab officials.

The Administration’s initial responses to the killings, including by Secretary of State Antony Blinken, had an even-handed appearance with references to security of both Israelis and Palestinians.

However, some observers saw Defense Secretary Lloyd Austin’s meetings with Israeli officials, with no challenge to the strikes, as a “green light” for ongoing attacks.

The US bolstered that evaluation when it blocked a UN Security Council statement, reportedly with all other 14 Council members — including the UK and France — supporting the expression of concern over the violence.

On Wednesday, in his first call with Netanyahu, Biden “conveyed his unwavering support for Israel’s security and for Israel’s legitimate right to defend itself and its people, while protecting civilians”.

The next day, the President appeared to back the Israeli assault, irrespective of the toll among Palestinian civilians: “One of the things that I have seen thus far is that there has not been a significant overreaction [by Israel].”