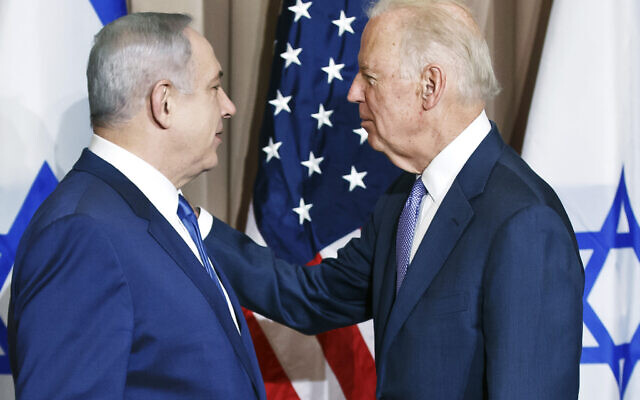 Shifting his position, Biden told Netanyahu by phone on Wednesday that he “expected a significant de-escalation today on the path to a ceasefire”.

In their previous call on Monday, Biden backed the Israeli strikes which have killed at least 227 Gazans, including 64 children and 38 women; wounded more than 1,500; and displaced more than 70,000. He “reiterated his firm support for Israel’s right to defend itself against indiscriminate rocket attacks” by Hamas, in which 12 Israelis have been killed or died while trying to flee.

After Wednesday’s call, Netanyahu rebuffed the US President, saying he was “determined to continue this operation until its goal is achieved”.

Israeli warplanes carried out dozens of strikes early Thursday. At least nine people were wounded in a house in Khan Yunis in southern Gaza, and eight were injured in a residential building in Jabalia in the north of the Strip. Seven civilians, including four children, were injured in a missile strike on a family home in central Gaza City.

Wednesday’s casualties including a Palestinian man with disabilities, his pregnant wife, and their 3-year-old daughter, all killed by a missile in Deir el-Balah in central Gaza.

A “senior Israeli official familiar with the negotiations” indicated Netanyahu’s rejection could be accompanied by a private move towards acceptance of a ceasefire.

The official, with “two others who corroborated the account”, said an agreement is likely within 48 hours. He said it will begin with the halt of all Israeli attacks on Hamas infrastructure and facilities and attempt to assassinate senior Hamas members.

Hamas will then halt all rocket fire at Israeli cities. The officials said Israel is also demanding that the digging of tunnels from Gaza ceases, and that there is an end to demonstrations on the border.

Later stages could include the return of the bodies of two Israeli soldiers and of two detained Israeli civilians. Israel would then allow the passage of goods and funds into Gaza.

US Continues Protection of Israel at UN

Despite Biden’s words, the US continued to block any UN Security Council statement for a ceasefire on Wednesday.

In its latest protection of Israel, the American delegation opposed a French-drafted UN Security Council resolution.

A US spokesperson said, “We’ve been clear and consistent that we are focused on intensive diplomatic efforts under way to bring an end to the violence and that we will not support actions that we believe undermine efforts to de-escalate.”

Diplomats said all of the other 14 Council members supported the French draft.

More than 130 Democratic members of the US House called on Biden to “facilitate the immediate cessation of violence” between Israel and Hamas and to “press both sides to quickly negotiate a ceasefire”.

Their letter to the President explained, “The alternative is an unfolding human tragedy of unimaginable dimensions.”