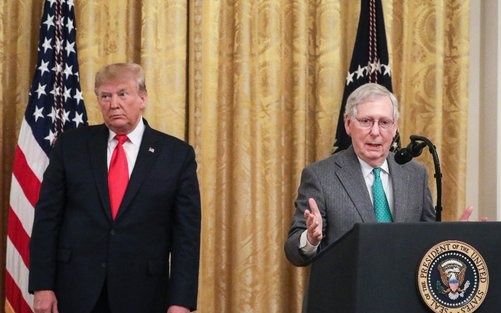 Donald Trump looks on as Sen. Mitch McConnell speaks in the East Room of the White House, November 6, 2019 (Drew Angerer/Getty)

How far will Trump go in the war? We look at the prospect that he will back Trumpists against Republican incumbents in Congressional races in 2022, and assess the extent of support for him at national, state, and local level.

And we consider if Trump will be checked by criminal cases: “You can’t run for President if you’re sitting in a prison cell.”

There’s a chat at the end about the significance of President Joe Biden’s decision to withdraw all US troops from Afghanistan by September 11, and the risk of doing so without a political resolution in the country.

Republican Concern Over Trump Insult of “This Dumb Son of a Bitch Mitch McConnell”
The Battle for the GOP: Trump Declares War on McConnell

Donald Trump got to where he was not by considering issues, not by being effective on policy. He got there by delegitimizing everybody.

The media are “fake news”. “Liberals” are horrible. At the end of the day, he tried to delegitimize the courts, Congress, and state governments.

That, even more than right-wing militias who support him, is the threat to US democracy.