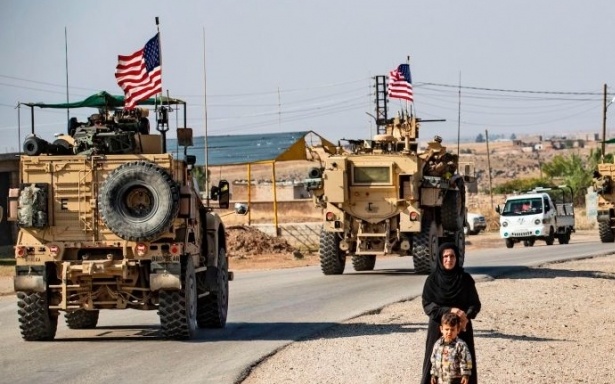 US troops in northeast Syria, January 2020

US officials are now pulling back their suspicion that Russia carried out a directed-energy attack on American troops in northeast Syria.

A former US official said that the incident has now been traced: “[The affected troops] had bad food and…no one else on the base had the same symptoms.”

A military physician evaluated that the symptoms began before the Russia patrol near the American base, a defense official said.

Federal agencies are still investigating at least two possible incidents inside the US, including one near the White House in November 2020.

ORIGINAL ENTRY, APRIL 24: The Pentagon suspects Russia of directed-energy attacks on US troops in northeast Syria.

Officials briefed top legislators on intelligence about the incidents, according to “two people with direct knowledge of the matter” and Congressional staff.

“Four former national security officials directly involved in the probe” said suspected Russian attacks around the world have been investigated since last year.

The briefings included information about injuries sustained by US troops in Syria. In one incident in autumn 2020, several personnel developed flu-like symptoms.

After publication by Politico of the revelations, the head of US Central Command, Gen. Frank McKenzie, told a Senate Armed Services Committee hearing that he has seen “no evidence” of the attacks.

The Pentagon’s investigation is part of a wider, multi-agency enquiry into directed-energy attacks. Since late 2016, almost 50 US officials have reported symptoms of a mysterious “Havana syndrome”, first occuring in US diplomats posted in Cuba. Symptoms included acute ringing and pressure in the ears;loss of hearing and balance; fatigue; and residual headaches. Some victims have suffered long-term brain damage.

About 1,000 US personnel are in Syria. About half are in the northeast alongside the Kurdish-led Syrian Democratic Forces, which expelled the Islamic State from the area between 2017 and 2019. Half are stationed at the Tanf base in eastern Syria on the Iraq border.

The Assad regime has pledged to retake “every inch” of Syria, including the territory under Kurdish authorities. But hundreds of pro-Assad forces, supported by Russian mercenaries, were killed by US strikes when they advanced on an oilfield in the northeast in February 2018.

Since then, Russia and the regime have waged a protracted propaganda campaign against the US and the SDF to force an American withdrawal from territory with the large majority of Syria’s oil and gas reserves.

Donald Trump, after phone calls with Turkish President Recep Tayyip Erdoğan in December 2018 and October 2019, ordered a full departure of US troops. After the 2019 conversation, Turkey — which consider Syria’s leading Kurdish factions to be part of the Turkish Kurdish insurgency PKK — launched a military operation to seize a corridor along the border, eastwards across the Euphrates River to the Iraq frontier.

But the Pentagon and other US agencies maneuvered against Trump’s order, retaining the personnel alongside the SDF and at the Tanf base.