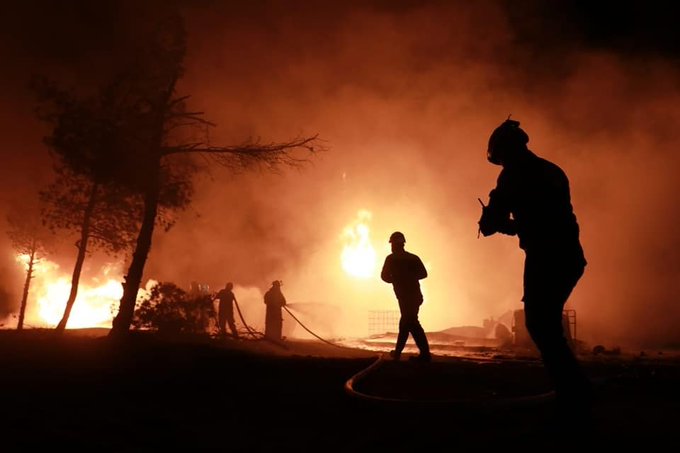 Russia has attacked oil refineries in north Syria for the second time in nine days.

The refineries are in northeast Aleppo Province. Russia’s missiles on the sites killed four civilians, including a White Helmets rescuer, and injured 42 on March 6.

The White Helmets civil defense updates with video of Russia’s bombing, and figures on the casualties and damage.

This is is not a battlefield … but the fuel market in the village of Al-Hamran in the eastern countryside of #Aleppo turned by the regime forces and Russia into a piece of hell for civilians whose only sin is seeking to earn a living for their families. #WhiteHelmets #Syria pic.twitter.com/X9FzXX0Pvn

Four civilians, including a rescuer, were killed and 42 wounded by seven Tochka surface-to-surface missiles with cluster munitions. More than 200 fuel tankers and two civil defense vehicles were damaged.

The White Helmets civil defense has issued a statement about Russia’s bombing of oil refineries in north Syria, updating the casualties to four civilians killed and 42 wounded. Tt notes Moscow’s use of surface-to-surface missiles with cluster munitions.

The White Helmets have also posted photos from the funeral of rescuer Ahmad al-Waki, killed while battling one of the blazes set by the Russian attacks.

TRT World reports on the strikes, noting the importance of the “main lifesource” of oil for farmers, bakeries, businesses, and homes.

Pro-opposition activists have posted an image of a long-range Russian missile purportedly used in Friday’s attacks on oil refineries in north Syria.

Wreckages of (one of) the Tochka missile used to target civilian infrastructures (oil facilities) in Northeastern #Aleppo countryside. This implies that the attack was carried out by #Russia/#SAA.
As reported by @QalaatM, the missiles probably came from the S. Kuweireis Airbase. https://t.co/bjEuFGpD1K pic.twitter.com/TH7dhV5b1d

ORIGINAL ENTRY: Three civilians and a White Helmets rescuer have been killed in the latest Russian attack on oil refineries in northern Syria.

The attack was on refineries near al-Bab and Jarablus in eastern Aleppo Province. More than 100 fuel tanks were detonated, setting large fires to which almost 70 White Helmets responded.

Local sources claim that missiles were fired from the Mediterranean, pointing to Russian responsibility. One pro-opposition activist said at least one missile was launched from Russia’s Hmeimim airbase in western Syria.

Three civilians and one Syrian Civil Defence volunteer were killed & 27 injuries due to the shelling of fuel refineries in Tarhin near Al-Bab & Al-Hamran crossing near Jarablus both in eastern rural Aleppo. Over 100 fuel tanks were burned down & 67 @SyriaCivilDef are responding. pic.twitter.com/ZaLVSAdbYx

The slain White Helmets rescuer was named as Ahmad al-Waki. He was trying to extinguish fires in makeshift refineries in Tarhin near Al-Bab.

Defying the ceasefire which it arranged with Turkey in March 2020 for northwest Syria, Russia has periodically bombed the oil refineries using drones, Tochka missiles, and cluster munitions. There were damaging attacks in November 2019, October and December 2020, and in January and February.

The refineries started as primitive operations trying to supply the opposition area of northwest Syria, even as it was being bombed and besieged by pro-Assad forces. Mainly located in northern and eastern Aleppo Province, they have been developed as fuel stations under the control of the Turkish-supported Syrian National Army.