“Deferred Execution” for Former Rebels and Defectors in Southern Syria 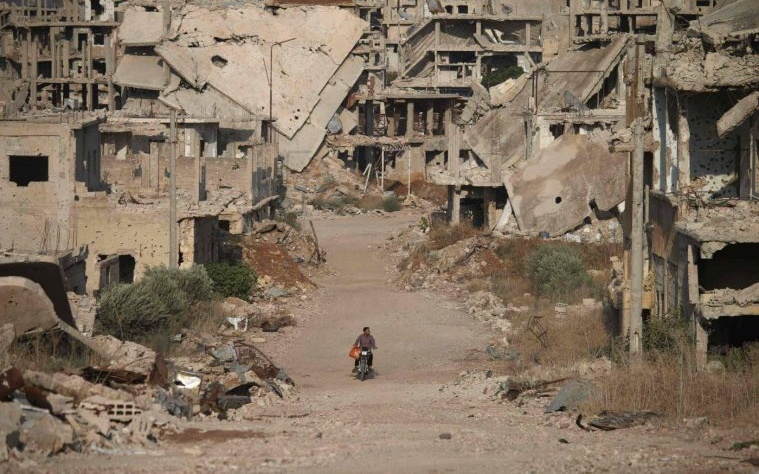 A destroyed street in Daraa, Syria in 2018 (AFP/Getty)

Almost 125 former rebels and defectors from Assad regime forces have been forcibly disappeared or tortured to death in southern Syria since the area was overrun by a Russian-regime offensive in summer 2018.

The regime proclaimed a “reconciliation”, but about 92 men have disappeared while 31 were killed by torture, according to the Daraa Martyrs Documentation Office.

The numbers are in a report by Syria Direct, with first-hand accounts from relatives of those who are missing or slain.

Journalist Walid al-Nofal speaks with those close to “al-Hamad”, who enrolled in military service after the “reconciliation” in the hope that he could one day “continue his university studies and pursue his future and [return] to the little shop that provides him and his family with income”.

Al-Hamad spent 21 months on the frontlines in Idlib and Hama Province in northwest Syria and in the Syrian desert in the east of the country. But he was taken by a military patrol to an unknown location last November.

Another conscript, “Osama”, has not been in contact with his family since August. An officer finally told his family that he was arrested by the Fourth Division’s security office for unknown reasons.

Osama’s brother suspects the seizure is related “to having previously worked with the Free Syrian Army” for more than five years in northern Daraa Province.

“We have paid two million Syrian liras so far, and we still do not know anything about him,” the brother said.

Two residents from Osama’s town in northern Daraa say he was one of four men from the town who were arrested by regime-affiliated groups.

“Either You Fight, or You Get Killed”

The revelations come as Assad regime forces have attacked towns and villages across Daraa Province, the site of the March 2011 uprising against the regime, after demanding the handover of weapons and wanted men.

Late last month, the pro-Assad units assaulted Tafas in western Daraa. The attack was repulsed, but regime military officials said this week that their forces have now entered the town.

Those who are not “disappeared” or tortured are far from secure. In 2020, 76 men from Daraa Province were killed after being conscripted, according to a report by the pro-opposition Houran Free League.

Ahmad Bassam, who was on the frontline in western Aleppo Province.

We were put between two rifles, one behind us and one in front of us: either you fight, or you get killed.

Several times, we were left to face Turkish strikes and endure shortages in supplies and food as if we, members of the Reconciliation, were fuel for this war whom they wanted to get rid of. We were always suspicious to them.