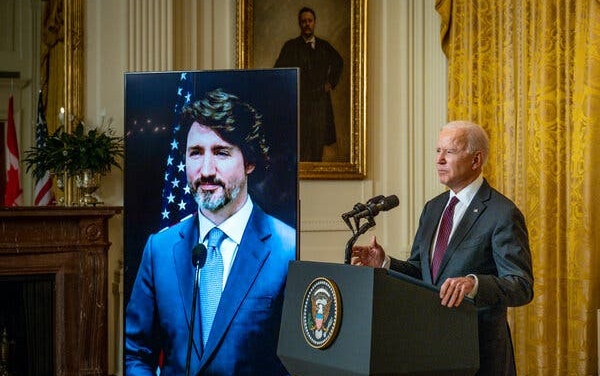 In a lengthy video conference, the two leaders swapped praise and pledged to work together on issues such as climate change.

Biden immediately disposed of Trump’s personal insults and tariffs on goods such as steel and aluminum: “The United States has no closer friend than Canada. We’re all best served when the United States and Canada work together and lead together.”

Trudeau responded, “US leadership has been sorely missed over the past years.”

After the meeting, the leaders delivered statements from the East Room of the White House, Trudeau’s by video screen. They spoke of cooperation on the Coronavirus pandemic and climate change, restoration of economies, and efforts against racial discrimination.

As the leaders of the major democracies, we have a responsibility to prove that democracy can still deliver for our people. There are a lot of leaders around the world who are trying to make the argument autocracy works better.

In a “blueprint” for co-operation, Biden and Trudeau pledged co-ordination of climate policies with a goal of net zero greenhouse gas emissions 2050.

A joint strategy includes sale of “clean” electricity across the border, batteries for electric vehicles, reduction of methane emissions, and stricter targets for reduced emissions before the UN climate summit in Scotland in November.

The leaders also said they will protect businesses from unfair competition with countries with weaker climate policies.

Immediate challenges have been set. On the day of his inauguration, Biden suspended the Keystone XL oil pipeline from from Alberta to Indiana and Illinois, leaving Trudeau “disappointed”. Canadian manufacturers are concerned about Biden’s “Buy American” message, and US dairy producers oppose Canadian tariffs and price and supply controls.

And Trudeau has sought purchases of vaccines from Pfizer’s manufacturing facility in Michigan, supplementing supplies that are coming from a Pfizer plant in Belgium.

White House Press Secretary Jen Psaki said, “I don’t expect them to make any commitments during the meeting today.”

Instead, Tuesday’s virtual encounter focused on the positive. Trudeau hailed:

I have to say as we were preparing the joint rollout of the communique on this — it’s nice when the Americans are not pulling out all the references to climate change and instead adding them in.

Other areas of cooperation include increased defense spending by Canada, a deepened Canada-US defense partnership in the Arctic, initiatives for refugee resettlement, and bolstered supply chains amid the pandemic.