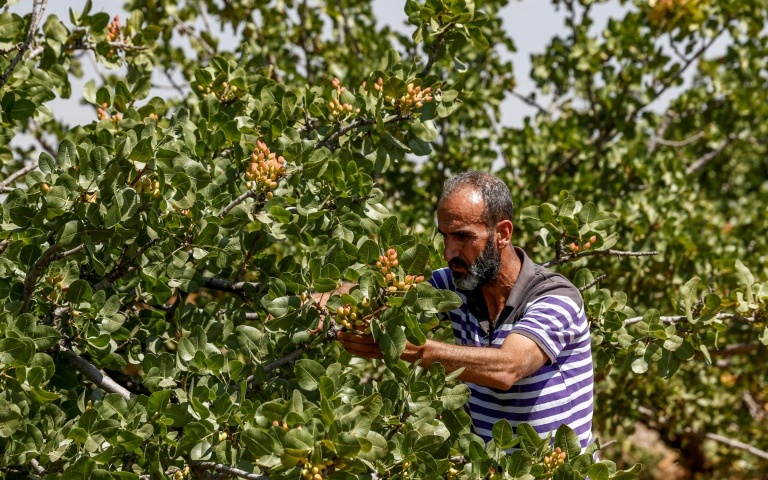 A pistachio farmer tends to his orchard in Maan, Hama Province, Syria (AFP)

Syria’s Assad regime is seizing the land of displaced farmers.

Syria Direct’s Mahmoud Hamza reports on the seizures by the regime’s military and security committee in northwest Syria, taking the property of men who are now in opposition-held Idlib Province.

The Syrian Network for Human Rights has documented at least 22 announcements of public auctions for farmlands with crops such as wheat, barley, potato, and olives. They cover 134 villages and towns in Hama Province and 88 villages and towns in Idlib, with a total area of almost 100,000 acres.

The regime’s committee cites an edict that it can take “lands owned by people living outside the jurisdiction of the Syrian national state and living in areas under the control of armed groups”. However, the Syrian Civil Law says “the owner of an object alone, within the limits of the law, has the right to use, exploit and dispose of it”.

These auctions are fundamentally unconstitutional and illegal….[The Constitution] protects private property or the right to the fruits of one’s lands. It is inadmissible to seize it except in public interest by a decree and for fair compensation; otherwise it is considered a flagrant violation of property rights.

“I Can Never Return”

One victim is “Ahmad al-Hassan”, who had a nine-dunum (2.2-acre) plot with 150 pistachio trees in Kafr Zita in Hama Province. The land was sold in an auction by the regime-affiliated Farmers’ Union, depriving Hassan of his $2,500 annual income that supports a family of eight.

Hassan inherited the land from his father, who gained ownership in 1958: “[It was] a part of my life, I inherited it and grew up in it.”

But the farmer now says, “I can neither return to the city nor object to the decision.” The family subsists on a monthly food basket in their camp in Idlib.

“Fayyad al-Rajab”, also with a family of eight, tells a similar story about his 15-dunum (3.7-acre) plot which generated $4,000 each year in Halfaya in Aleppo Province. He now works in a thrift shop in the Khalil camp.

“Jamal al-Bakri” was displaced in August 2019 when pro-Assad forces occupied al-Tamanah in Idlib Province. He still maintained his 30-dunum (7.4-acre) plot of pistachio trees through a person paid SYP 80,000 ($24.50) per dunum.

But seeing others lose their land, he cut his losses through an auction in which he agreed with a resident to buy back the property. He said others are doing the same in the “town of Morek and the villages of Sukayk, Sukayat and Tell Tari which are famous for growing pistachio”.

Although he still splits proceeds with the buyer of his plot, Bakri now gets “less than half of what I used to make in previous years working on the land”.