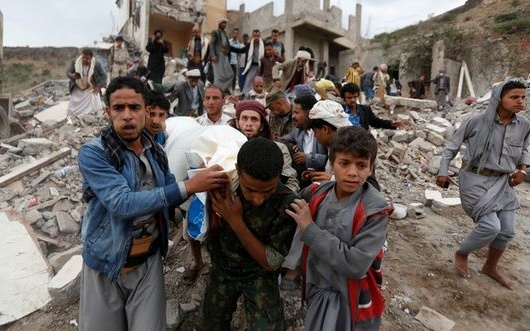 Men and boy carry a body from the rubble of a house destroyed by a Saudi coalition airstrike on Sana’a, Yemen in 2017 (Khaled Abdullah/Reuters)

In an address laying out his Administration’s approach to US foreign policy, President Joe Biden ends American support for offensive operations in Yemen.

Biden ordered an end to arms sales and other assistance to Saudi Arabia, which led military intervention in Yemen’s civil war in March 2015, citing a “humanitarian and strategic catastrophe”.

The President also told State Department staff that he would center US policy and actions on diplomacy and took a strong line with Moscow, saying the US will no longer be “rolling over in the face of Russia’s aggressive actions”.

After an 2011 uprising which ended in the removal of leader Ali Abdullah Saleh after almost 22 years in power, a National Dialogue could not establish a consensus on a stable Yemeni Government. Instead, in 2014 the Houthi insurgency took over the capital Sana’a and forced President Abdrabbuh Mansur Hadi and his officials to flee to the port city of Aden in southern Yemen.

Saudi Arabia, under the current Crown Prince Mohammad bin Salman, and the UAE led the air and ground operations seeking the defeat of the Houthis. But more than 100,000 civilians have been killed in Yemen since then, and millions face famine amid blockades. The Houthis remain in Sana’a, while the Southern Transitional Council, backed by the UAE, is seeking secession.

A UN-led process is pursuing a lasting ceasefire and a political resolution.

Donald Trump regularly pushed back efforts to end support for Saudi Arabia, or even criticize Riyadh, for indiscriminate bombing. He also tried to check efforts for Saudi accocuntability, including that of the Crown Prince, over the assassination of dissident journalist and activist Jamal Khashoggi in a Saudi Consulate in Turkey in October 2018. Instead, he proclaimed that US arms sales to Saudi Arabia “creates hundreds of thousands of jobs”.

During his Presidential campaign, Biden pledged to stop selling arms to the Saudis. One of the Administration’s first actions after the January 20 inauguration was to suspend the sale of $478 million in precision-guided munitions to Riyadh, which had been approved by the State Department approved in December over objections from legislators. Arms sales to the UAE are being reviewed.

Biden said on Thursday that US sales of defensive weapons to Saudi Arabia will continue, protecting it from a series of missile, drone, and cyber attacks amid its regional contest with Iran.

“We’re going to continue to support and help Saudi Arabia defend its sovereignty and its territorial integrity and its people,” the President said.

Biden also made no reference to possible sanctions over the Khashoggi killing and any role played by Mohammad bin Salman. Director of National Avril Haines has said she will declassify intelligence about the slaying of the dissident by a 15-member Saudi team which lured him to the Consulate in Istanbul.