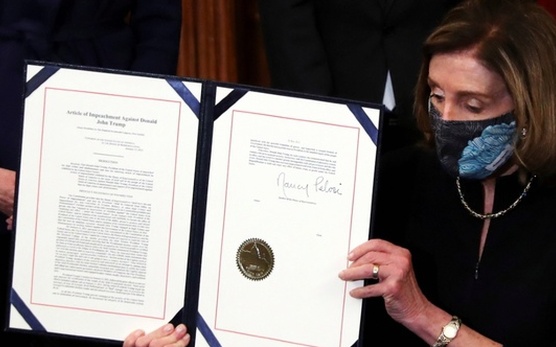 House Speaker Nancy Pelosi holds up the signed article of impeachment against Donald Trump at the US Capitol, January 13, 2021 (Leah Millis/Reuters)

Donald Trump becomes the first President to be impeached twice.

The House charged Trump, only the third President to be impeached, on one charge of “incitement to insurrection” following his encouragement of an attack on the Capitol on January 6. In the 232-197 vote, 10 Republicans joined all 222 Democrats over “inciting violence against the government of the United States”.

The article will be sent to the Senate for a trial. The chamber’s top Republican, Mitch McConnell, said on Wednesday that he will not begin proceedings until after the inauguration of President-elect Joe Biden on January 20.

Speaker Nancy Pelosi asked colleagues to embrace “a constitutional remedy that will ensure that the Republic will be safe from this man who is so resolutely determined to tear down the things that we hold dear and that hold us together”.

He must go. He is a clear and present danger to the nation that we all love….It gives me no pleasure to say this — it breaks my heart.

Trump was also impeached in December 2019 over his pressure on Ukraine to spread disinformation about Biden during the Presidential campaign. McConnell ensured that all Republicans except Sen. Mitt Romney backed Trump in the trial in January 2020, preventing his conviction.

The ten Republican Representatives who voted to impeach on Wednesday were the largest bloc of a President’s own party to do so in history. They are:

The President bears responsibility for Wednesday’s attack on Congress by mob rioters. He should have immediately denounced the mob when he saw what was unfolding.

But McCarthy, who refused to accept Biden’s electoral votes after the attack, held out against impeachment.

The House voted as thousands of armed National Guard members protected the building, stationed in the halls as well as outside.

Capitol Police were positioned metal detectors, mandated by the House after the attack, although some Republican legislators evaded them or did not stop when they set them off.

Speaker Pelosi later introduced a measure imposing a $5,000 fine for the first evasion of the detectors and $10,000 for the second offense.

In the chamber, Rep. Jaime Raskin, the lead impeachment prosecutor, spoke of the Trump supporters who attacked police and roamed the halls chanting, “Hang [Vice President Mike] Pence” and “Where’s Nancy [Pelosi]?” as legislators hid or evacuated the House and Senate chambers. Five people died, including a police officer beaten to death with a fire extinguisher.

“They may have been hunting for Pence and Pelosi to stage their coup,” Raskin said, “but every one of us in this room right now could have died.”

GOP Rep. Herrera Beutler spoke of defying pressure to vote No, amid reports that some Republican Representatives feared for their safety and that of their families if they supported impeachment.

I’m not afraid of losing my job, but I am afraid that my country will fail. I’m afraid patriots to this country have died in vain. I’m afraid my children won’t grow up in a free country. I’m afraid injustice will prevail.

Rep. Rice said he had “backed this president through thick and thin for four years…but this utter failure is inexcusable.”

And Rep. Meijer issued a statement, “The President betrayed his oath of office by seeking to undermine our constitutional process, and he bears responsibility for inciting the violent acts of insurrection last week.”

However, other Republicans, including Trump’s leading House attacked Rep. Jim Jordan, threatened to strip Cheney of her position as third-ranking GOP member and her committee roles.

President-elect Biden said in a statement after the vote that he wanted Americans to unite after an “unprecedented assault on our democracy”. He amplified his view that the Senate can split its day after his January 20 inauguration, devoting half to essential issues such as the Coronavirus pandemic and economy and half to Trump’s trial.

Today, in a bipartisan vote, the House voted to impeach and hold President Trump accountable. Now, the process continues to the Senate—and I hope they’ll deal with their Constitutional responsibilities on impeachment while also working on the other urgent business of this nation.

Banned by leading social media outlets, Trump was pressured to release a video by his staff, who warned him that he faces potential legal action over his role in the Capitol attack.

In the video, Trump urged followers to avoid a repeat of the violence in “the coming days both here in Washington and across the country”. He did not mention his role in last Wednesday’s events or mention Biden by name.

After the attack, Trump initially praised the assailants as “patriots”: “We love you. You’re very special.” The following day, he recanted and criticized the “heinous attack” — only to express fury that the retreat made him look weak.