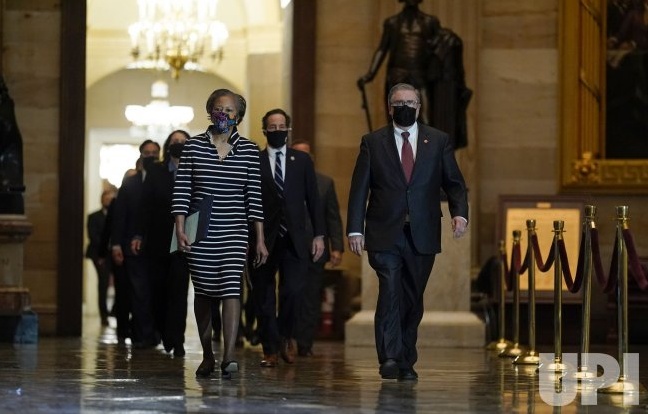 Clerk of the House Cheryl Johnson leads House impeachment managers as they deliver to the Senate the article of impeachment against Donald Trump, US Capitol, January 25, 2021 (J. Scott Applewhite/AFP/Getty)

The House has formally delivered the article of impeachment against Donald Trump, charging him with “incitement of insurrection” over the January 6 attack on the Capitol, to the Senate.

The nine House impeachment managers walked to the Senate chamber just shortly after 7 p.m. on Monday.

The managers are compiling a case against Trump, using his statements, lies, and disinformation in the run-up to the attack as well as his January 6 invocation to followers to march on the Capitol to block the Congressional certification of President-elect Joe Biden.

Donald John Trump engaged in high crimes and misdemeanors by inciting violence against the government of the United States….

President Trump gravely endangered the security of the United States and its institutions of government. He threatened the integrity of the Democratic system, interfered with the peaceful transition of power and imperiled a coequal branch of government.

The impeachment managers and advisors have reviewed hundreds of hours of evidence, including footage scraped from the hard-right social media platform Parler and other sites — to build the timeline.

Seventeen Republicans need to join all 50 Democrats for the two-thirds majority to convict Trump.

The Senate’s top Republican, Mitch McConnell of Kentucky, shifted last week to denounce Trump’s “lies” on January 6 and to indicate that he would consider conviction. However, in recent days, McConnell has focused on attempts to delay the trial, which is scheduled to begin February 8.

Trump’s friend Sen. Lindsey Graham of South Carolina insisted on Monday, “There are only a handful of Republicans and shrinking who will vote against him.”

Another Trump ally, Sen. Ron Johnson of Wisconsin, chided that Democrats are being “sore winners” as he maintained that there were not enough Republicans who will vote for conviction.

Senators will be sworn in as jurors on Tuesday, and an official summons will be delivered to Trump.