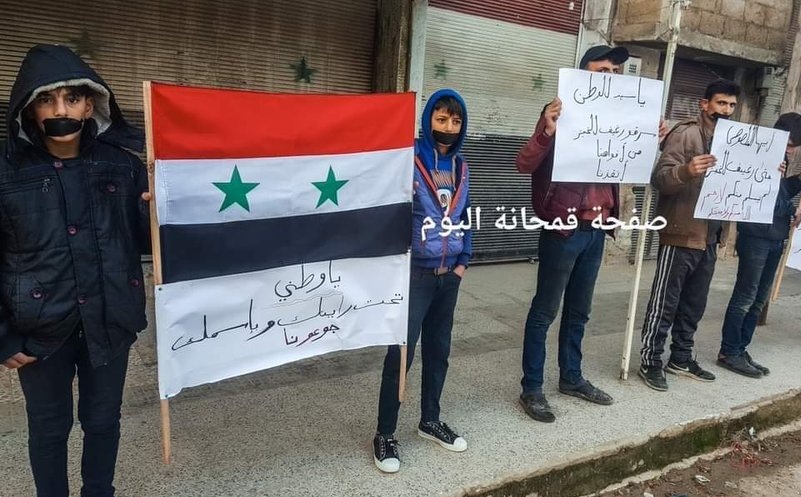 For the first time, a bread protest has been staged in an area of Syria held by the Assad regime.

Yesterday, 7 Syrians in Qomhaneh participated in the first documented protest demanding bread in areas solidly under Syrian regime control. The extreme bread shortage in this loyalist town & regime response to it are quite telling. pic.twitter.com/72T00YYJhW

The protest was organized by a father of seven children who encouraged his nephews to participate.

Most in Qomhaneh have continued to accept the regime during Syria’s 118-month conflict. Some of its young men joined pro-Assad militias, especially Division 25 of the paramilitary Tiger Forces.

The division has been implicated in war crimes such as the use of chemical weapons, and in smuggling and sale of fuel stolen from the regime’s military.

Residents say more than 300 men of the town’s 5,000 families have been killed in combat.

One resident told journalist Elizabeth Tsurkov that “it takes 3 days to finish washing clothes” because of sporadic supply of electricity, usually only 1 hour in 8. There are also near-constant cutoffs of water.

Before the uprising in March 2011, the Assad regime was an exporter of wheat. But domestic production has fallen from 4 million to 1.2 million tons. The situation has been compounded by a ban by the Kurdish autonomous administration, which controls much of northeast Syria and the bulk of the country’s wheat production, on sales to other areas.

The regime has been unable to fill tenders for imported wheat, and shortages have been exacerbated by the disappearance of 500 tons as it was offloaded from a ship.

The World Food Program says about 9.3 million people, about 60% of Syria’s remaining population, are food insecure.

See also UPDATED Syria: “Half of My Day is Spent Waiting for Bread”

In September, the regime cut daily rations of subsidized bread for families of less than seven people. The cost was doubled, and the weight of a pack was reduced by about 15% . The price on the black market of an eight-loaf packet of subsidized bread is 10 times that of the subsidized equivalent

The sale of subsidized bread in Qomhaneh was moved to an electronic “smart card” system in December, worsening shortages, according to residents. About 2,000 families, displaced from neighboring Idlib Province, are not covered by the town’s quota.

Original residents of Qomhaneh are entitled to only one subsidized bag of bread with 7 pitas, regardless of the size of the family, from the daily delivery to the town of 5,575 bags.

A militiaman told Tsurkov that the quality of bread is poor: “This is not edible but we have to eat to avoid starving to death.”

Pro-Assad TV and radio stations covered the shortage of bread, citing complaints, but only one radio station mentioned the protest. Qomhaneh Today, a pro-Assad Facebook page, deleted photos and a video that it had posted.

Regime officials have swung between denial of any shortages and resolutions to solve them, blaming local corruption.

Agriculture Minister Hassan Qatana tried to play down the crisis last month: “Let’s go back to baking bread in our houses instead of waiting on the government.”

He did not explain how households would bake without the flour made from wheat.

Qomhaneh’s residents respond that they have sacrificed “for the state”, only to suffer poor services. One resident said, “We just want bread. Let them cut the electricity and internet, but bread is essential.”