EA on Monocle 24: Trumpism v. Republican Party in 2021 and Beyond 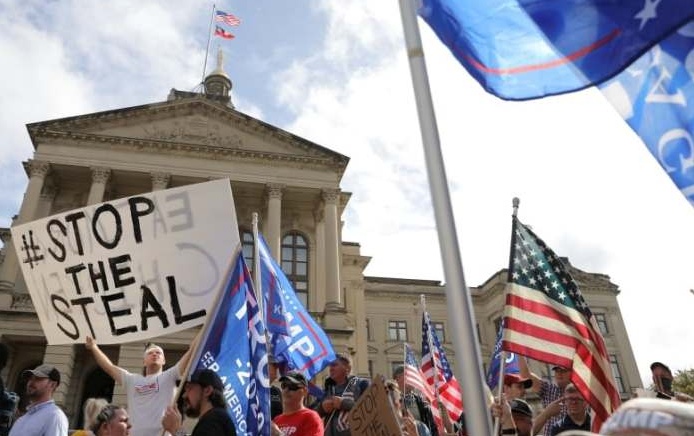 A Trumpist protest outside the State Capitol in Atlanta, Georgia just after the November 3 election (Dustin Chambers/Reuters)

As Donald Trump persists with his disinformation campaign to overturn the November 3 election — and as his primary messenger, attorney Rudy Giuliani, tests positive for Coronavirus — I chat with Monocle 24’s Georgina Godwin about the escalating conflict between Trumpism and Republicans within the GOP.

We begin with Trump’s Saturday night performance in Georgia, where the two Republican Senators facing run-off votes — and the GOP facing a loss of control of the Senate — took second place to Trump’s railing about a “RIGGED ELECTION”.

I consider why more Republican legislators are not calling on Trump to accept his Presidential defeat. That leads to the question: how will the party cope with its Trumpists in 2021 and with a likely Trump declaration of a 2024 bid to reclaim “his” White House?

I answer the question if Trump is a “totalitarian” threat, and conclude with a thought about how the rest of us can deal with Trump as he plans a rival spectacle to President-elect Joe Biden’s inauguration on January 20.

The lesson with Donald Trump is the lesson I have taken from being a parent with two children. The more that I listened to their tantrums and put them in the center of the room, the worse it became.

If I put them in the corner, I had a chance of peace and quiet — not immediately, but down the road.

Put Donald Trump in the corner.