Trump Is A Terrible Leader, But He’s Not a Fascist 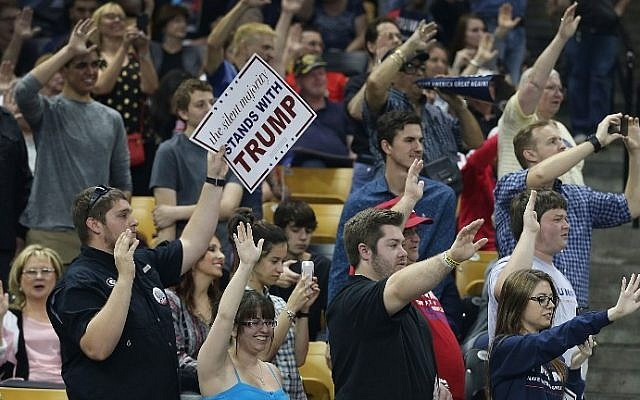 People raise their arms as Donald Trump asks them to pledge they will vote for him, Orlando, Florida, March 5, 2016 (Joe Raedle/Getty/AFP)

Originally written for the University and Birmingham’s History and Cultures:

As Donald Trump’s Presidency draws to a close, it is time to address a heated debate that reached a feverish crescendo in the weeks and months before the November 3 election: was this Fascism, American-style?

Commentary and books have viewed Trump through the lens of Fascism: from Yale Professor Timothy Snyder’s On Tyranny to former US Secretary of State Madeleine Albright’s Fascism: A Warning. Who can watch the anger at Trump’s rallies without thinking of the Two Minute Hate in George Orwell’s 1984? And who can overhear an echo of Hitler’s last days in a Berlin bunker when we witness Trump’s desperate post-election attempts to cling to power? Memories of Fascism pervade our collective memory, and you can always find something in current events with a vague reminiscence.

But viewing Trump through this lens is equally misleading with a view to democracy and what we need to do to keep it alive. In short, the comparison is bad history and bad politics.

Trump was a terrible political leader, but he was not a leader in the Fascist mold. There are at least ten important differences:

Fascist regimes grew in a world with limited international trade and with a capitalism that many viewed as moribund, which gave national governments enormous leeway to shape economies with everything from state-led industrialization projects to the Mefo bills that helped to fund the rearmament program of the Nazis.

Today we live in a world of global capitalism for better or worse, and international trade is deeply ingrained into our economies. Trump tried to tweak the rules of the global economy here and there, but there was no push for the autarky model so dear to the heart of many Fascists.

As a result, the fundamentals of the US economy remain unchanged. When economic historians come to assess Trump’s impact, they will talk about the loss of fiscal revenue, the costs of his trade wars for American consumers, and the pandemic, but they will conclude that there was not much of a basic difference.

2. The Threat to Capitalism (or Lack Thereof)

Fascism grew against the backdrop of Bolshevism and the perceived threat of a Communist revolution. Scholars have shown for numerous countries that the threat was often exaggerated – but it did exist and genuinely scared the bourgeoisie.

However, that fear subsided in the decades after World War II, with the golden years of Western capitalism. People enjoyed the fruits of mass consumption while Communism went downhill: it gradually lost its shine, its legitimacy, and its hold on power. No Western country has seriously considered going socialist over the last 30 years.

During the interwar years, Fascist and other governments had to reckon with a Soviet Union that spread its tentacles around the world, but that Soviet Union is no more since 1991, and there is nothing that can take its place. Venezuela and Cuba will not bring down global capitalism.

Trump thrived on the grievances of a white population that faces demographic marginalization in an increasingly multi-cultural society.

Hitler never feared demographic marginalization from Germany’s Jews because they accounted for less than 1% of the population. Trump’s hardline immigration policy was the exact opposite of the policy of Fascist Italy, which sought to curb outward migration of Italians to the Americas.

To be sure, Trump’s immigration crackdown is open to criticism on several grounds, but it’s really small change compared to the Nuremberg Laws.

4. In the Western World, We Are All Children of the Human Rights Revolution of the Post-War Years

There is a plethora of laws, agreements, and court decisions that counter discrimination based on race, ethnicity, gender, sexual identity, and disability, creating a new moral universe.

We can see the consequences in the repeated efforts of the Trump administration to blame others for antisemitism, racism, gender bias, and in Trump’s claim that he did more for the black community than any other President except Abraham Lincoln. Now that claim is patently absurd – but Hitler never claimed to have done anything for the Jewish community.

5. The Global Dimension of the Human Rights Revolution

For all its ugliness, the impact of Fascist rule was largely limited to the places where they came into power and the places that they attacked or conquered.

Trump resonated around the world. While he has done enormous damage to the soul of American society, the real victims live elsewhere: in Egypt, in Hong Kong, in Rodrigo Duterte’s Philippines, in Viktor Orbán’s Hungary, and in many other places where authoritarian regimes are eroding human rights.

Nation-states are no longer distinct containers, and thanks to Trump, every crackpot dictator facing a tough election can point to his precedent.

6. The Power of Events That Never Happened

For the first three years, Trump did not face a major crisis that he did not cause himself. When his luck changed in year four, the crisis came in the form of a pandemic that he was unable to use for political gain.

There was no event similar to the Reichstag Fire that allowed Hitler to suspend the rule of law, or the murder of Giacomo Matteotti that put Fascist Italy on the path towards Mussolini’s dictatorship.

What would have happened in the event of a 9/11-style terrorist attack, a well-timed Russian invasion of a Baltic country, or Iran’s blocking the Strait of Hormuz? It is impossible to know, but we can be glad that these events never happened. 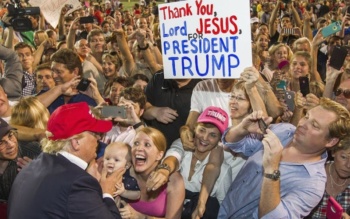 Donald Trump at a campaign rally in Mobile, Alabama, August 2016

7. The Rule of Law Intervened

There is quite a list of Trump associates who ended up in court as defendants: Michael Cohen, Rick Gates, Michael Flynn, Roger Stone, Paul Manafort. The Trump Foundation underwent court-ordered dissolution, and various cases and lawsuits are awaiting Trump’s departure from the White House.

Nothing similar happened to Fascist leaders. To the contrary, their rule built on a judiciary and an administrative state that enabled them.

Hitler had the crown jurist of the Third Reich, Carl Schmitt, who published his infamous essay “The Führer Protects the Law” – der Führer schützt das Recht – after the Night of Long Knifes. Trump has Rudy Giuliani. Case closed.

Money for the Dear Leader

Say what you will about Hitler and Mussolini, they never tried to cash in with a posh hotel in the capital. For Trump, making money was a prime motivation when he entered the race for the Presidency in 2015. One of the last remaining mysteries of that Presidency is about the extent of Trump’s personal corruption and whether it will ever be investigated appropriately.

Fascist regimes had their share of corruption – it inevitably thrives in authoritarian regimes – but if you compare Trump’s golden elevator with the legendary frugality of Portuguese dictator António Salazar, the contrast speaks for itself. 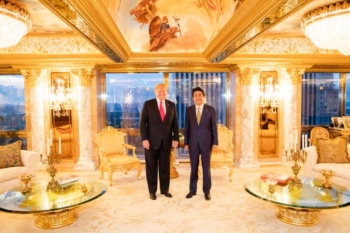 When Hitler, Mussolini, Salazar and Franco came to power, they knew exactly what they wanted to do. Trump never had an agenda beyond his own financial interests and his vanity.

The vacuum was filled the orthodoxy of the Republican Party since the Reagan years: tax cuts for the rich, conservative justices for the judiciary, and the casual strangulation of the regulatory state.

Trumpism is an ideology that never was, an empty signifier that provided thin camouflage for a ruler who never cared about his people.

The Nazi Party was never too religious about its 25-point party platform of 1920 – but at least it had a platform. The Republican Party declined to adopt a new platform at its 2020 convention, simply reusing the 2016 version. When Trump was asked about his goals for the second term, the answer was mushy even by his own standards.

Changes in the Name of Democracy

Viewing Trump through this lens also provides us with a terribly insufficient idea about democracy and what we need to do in order to save it.

In On Tyranny, Timothy Snyder offers the following as one of 20 lessons from the twentieth century: “Defend Institutions.” On first glance, this makes perfect sense. If it were not for civil servants like Alexander Vindman — the National Security Council official who testified about Trump’s shenanigans with Ukraine — and the checks and balances from the federal bureaucracy, the states, and the judiciary, we would probably be in a very dark place by now.

But should we really heap praise on the US system of law and order? After all, this is the same judiciary that put more than two million American citizens behind bars, the highest incarceration rate per capita in the world. This is the country where access to a well-paid lawyer and the color of one’s skin makes a world of difference, and where decisions on many important matters are delayed ad nauseam.

Beyond Black and White

But a living democracy is rarely about black and white. It is about compromise, about a balance between different interests, and that makes for many different shades of gray. Democracy is complicated, a kind of decathlon with different events that require different skills, and there is no guarantee that it all fits together. But you will not know that from looking at Fascism.

So is it wrong to call Trump a Fascist? The question misses the crucial point. The ghosts of the 20th century are still with us, and so is the moral shame that accompanies that epithet.

But while it may not be morally wrong to call Trump a Fascist, it is not very clever, and maybe that matters more as we look to the future. The last four years have shown the weakness of democracy, particularly when it is challenged by someone like Trump. Democracy does not look as decisive as the strongmen of our times, it is not terribly entertaining (and often pretty boring), and democracy looks rather helpless in the face of widespread anger.

But here is one thing that you can say in defense of democracy: it can be really smart – way smarter than the intellectual deadwood that is pervasive in the Trump Administration.

So this is my tenth and final point by way of comparing the Fascists and Trump: unlike the outgoing President, the Fascists were not dumb – they were smart enough to set an entire continent ablaze.

Being smart is not a privilege of democracies, but it works the other way around: it is hard to imagine a thriving democracy full of dumb people. And maybe that is something that we should keep in mind as we search for a path through the rubble that the last four years have left behind. 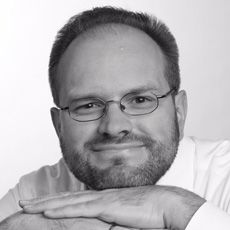 Frank Uekötter is Reader in Environmental Humanities at the University of Birmingham, working on environmental issues, both past and present, in a global context.