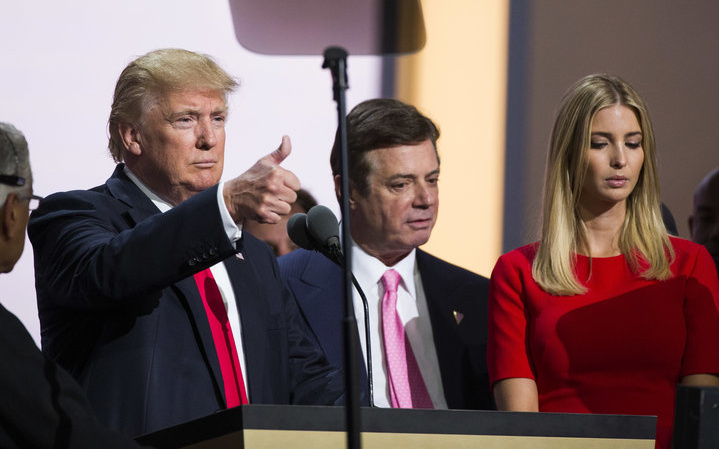 Donald Trump has pardoned another 26 associates and political supporters, including Trump-Russia operatives Paul Manafort and Roger Stone and the father of his son-in-law Jared Kushner.

The White House disclosed the list on Wednesday night after Trump left for his Florida resort for the Christmas holidays.

Trump has now issued 111 pardons and commutations during his time in office. More than 90% of those pardoned have personal ties or are political supporters.

Republican Sen. Ben Sasse reacted with six words last night: “This is rotten to the core.”

The campaign manager was sentenced for bank fraud, money laundering, and tax evasion. The crimes were connected with millions of dollars from his political consultancy, including for pro-Russian politicians and businessmen in Ukraine.

He was sentenced to a total of almost 7 1/2 years in prison in two sentencing hearings in March 2019.

The possibility of a pre-emptive pardon had been discussed in 2017 between Trump’s attorney John Dowd and Manafort’s representatives.

Stone, Trump’s long-time “political dirty trickster”, liaised with WikiLeaks over the dissemination of the e-mails stolen by the Russians. He was convicted on seven counts of lying to Congress, witness tampering, and obstructing the Trump-Russia inquiry.

In July, Trump commuted his ally’s sentence of more than three years, ensuring that Stone did not spend a day behind bars.

EA on Monocle 24: Roger Stone and Trump’s Stay Out of Jail Gamble

With the latest pardons and that for former senior campaign staffer Michael Flynn last month, Trump has pardoned all his allies who refused to cooperate with or misled the Trump-Russia investigation of Special Counsel Robert Mueller.

The only two figures who were not protected, former Trump lawyer and fixer Michael Cohen and Manafort’s deputy Rick Gates, spoke with Mueller’s team.

In the wording of the pardons for Manafort and Stone, Trump continued his attempt to bury reality with phrases such as “Russian collusion hoax”, “prosecutorial misconduct”, and “injustice.”

Charles Kushner, the father-in-law of Ivanka Trump, pleaded guilty in 2004 to 16 counts of tax evasion, one count of retaliating against a federal witness, and one of lying to the Federal Election Commission. He served two years in prison before being released in 2006.

Kushner retaliated against his brother-in-law, who was cooperating with federal officials in an investigation of campaign finance violations. The businessman acknowledged that he arranged to have a prostitute seduce his brother-in-law in a motel room in New Jersey where video cameras were installed, and then sent the videotape to his sister.

The case was prosecuted by US Attorney Chris Christie, a longtime Trump friend who would become a senior figure in the 2016 campaign. Last year, Christie said Kushner had committed a “loathsome” and “disgusting” crime.

Jared Kushner had a tense relationship with Christie for years, which may have prevented the politician from becoming Trump’s Vice Presidential nominee and led to his banishment from running the transition after the November election.

Others who received pardons or commutations include:

*Mark Shapiro and Irving Stitsky, whose 85-year sentences over a real estate investment fraud were commuted

*A former K-9 police officer who served a 10-year prison term for releasing her dog on a burglary suspect, badly injuring the man

*Two former associates of Conrad Black, the former media mogul who was found guilty of fraud and obstruction in 2007 and pardoned by Trump in 2019.