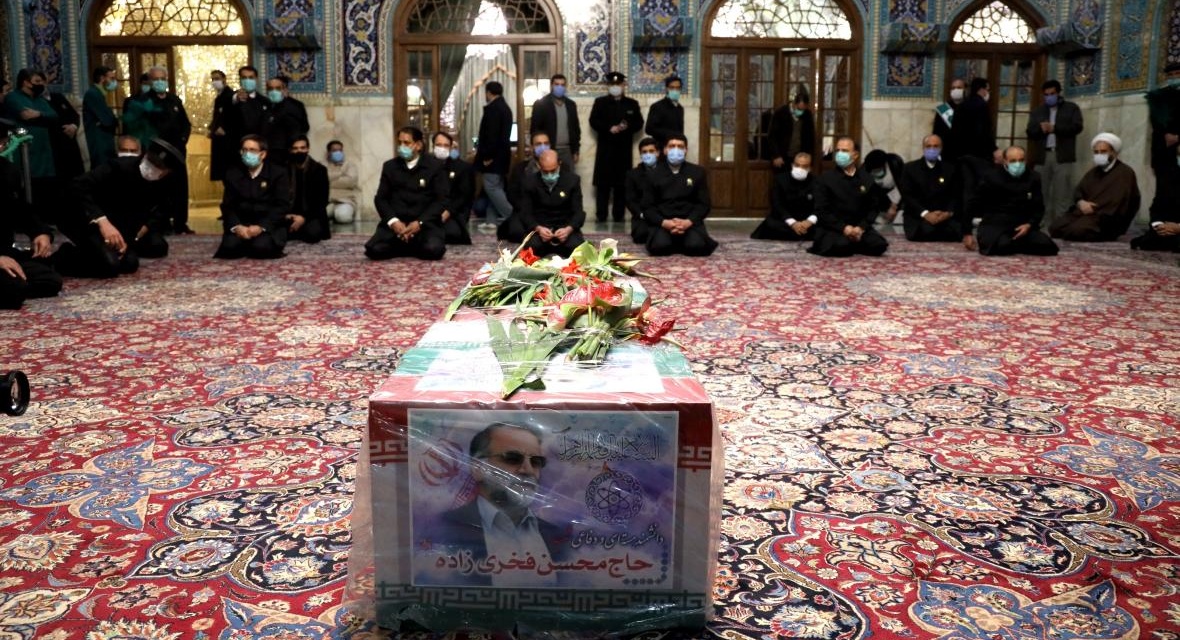 The Supreme National Security Council has tried to defuse the argument within Iran’s regime about its response to the assassination of top nuclear scientist Mohsen Fakhrizadeh.

The SNSC issued a statement on Saturday night that the Iranian Parliament’s bill, seeking a further suspension of commitments under the 2015 nuclear deal, does “not bring about any specific issue that would undermine national interests.”

The Council called for an end to internal disputes:

What is against national interests and a cause for concern is these controversies that have undermined the dignity and status of the country’s legal institutions and harm national unity and solidarity.

The recent remarks and attitudes that we have witnessed in recent days have compromised national interests for the sake of partisan interests, and while they do not serve the interests of the country, they convey a wrong message…to enemies.

The Guardian Council has blocked implementation of the bill, which includes a return to enrichment of 20% uranium, and returned it to the Majlis for further consideration.

The Rouhani Government argues that the legislation usurps the authority of the SNSC, and has called for diplomacy to deal with Fakhrizadeh’s killing and ongoing US sanctions.

Government spokesman Ali Rabiei complained on Thursday, “The level of violent discourse we see today in our domestic politics is unprecedented in the past 40 years.”

Parliament Speaker Mohammad Baqer Qalibaf is persisting with the challenge to the Government over a suspension of commitments under the 2015 nuclear deal between Iran and the 5+1 Powers.

The Trump Administration withdrew from the agreement in May 2018 and imposed comprehensive sanctions six months later.

The Rouhani Government has objected to the Parliamentary legislation requiring it to suspend the commitments no later than two months after the bill’s passage, saying that it usurps the authority of the Supreme National Security Council.

Rouhani said on Thursday, “Let us do our job….Let those — who have 20 years of experience in this field, have been successful in diplomacy, and have defeated the US in the UN — do their job with patience, tolerance, and wisdom.”

The Guardian Council sided with the Government earlier this week, returning the legislation to Parliament for further work.

The Guardian Council has blocked Parliamentary action over the killing of Mohsen Fakhrizadeh, the head of Iran’s nuclear program.

The Council, whose members are appointed by the Supreme Leader and the judiciary, returned a Parliamentary bill requiring the Government to suspend more commitments under the 2015 nuclear deal — including a return to the enrichment of 20% uranium, which potentially can be further processed to a military grade of more than 90%.

#Iran’s vice-president: The leader had entrusted the management of #nuclear issue to the Supreme National Security Council… At the time when maximum pressure has failed, we need not to bring a change to the management. This change can put much pressure on the country. pic.twitter.com/DrpDWOxufj

President Hassan Rouhani said on Wednesday that he did not agree with the steps to increase nuclear activities and reduce inspections by the International Atomic Energy Agency: “My administration…considers it detrimental to the process of diplomatic activities.”

He said that he had declined to go to Parliament during debate of the bill because of Coronavirus restrictions, not because of his objections.

Senior Iranian officials have replaced their original account of the killing of Mohsen Fakhrizadeh with a completely different narrative.

Initially, the officials said up to 12 gunmen had assassinated Fakhrizadeh.

But with no suspect in detention, the Secretary of the National Security Council, Ali Shamkhani, is saying that the killing was completely automated.

He accused the Iranian group Mojahedin-e Khalq, which has pursued the overthrow of the Iranian regime since 1979, and Israel’s intelligence agency Mossad of involvement.

#Iran’s SNSC Secretary Shamkhani: The assassination of #Fakhrizadeh was carried out with electronic equipment & no one was present at the scene, but there are clues. We know who did it… The MEK surely played a role; The criminal element behind this is Zionist regime & Mossad. pic.twitter.com/Rkq3mvfCTU

Fars, the site of the Revolutionary Guards, wrote that a few bullets from an automated weapon struck the car that Fakhrizadeh was driving. When he got out of the vehicle — “assuming the sound was caused by a collision with something or a problem in the car engine” — he was sprayed with bullets from a remote-controlled machine gun in a pickup truck 150 meters away. The truck then exploded

Iranian officials had initially said that the pickup detonated, halting Fakhrizadeh’s car, before the shooting began.

Head of judiciary Ebrahim Raisi has stepped up the rhetoric of confrontation, “Those who are asking us to show restraint are in fact showing a green light to terrorists.”

ORIGINAL ENTRY, NOV 30: Iranian officials have issued more threats of retaliation against Israel, as the assassinated head of the Iranian nuclear program, Mohsen Fakhrizadeh, is buried in Tehran.

Defense Minister Amir Hatami said at the ceremony on Monday morning, “No assassination and stupid action will go unanswered. The order of the [Supreme] Leader to punish the perpetrators will surely be done.”

Hatami said the budget of the Defense Ministry organization led by Fakhrizadeh will be doubled, in the Iranian year beginning in March.

The scientist was killed on Friday afternoon by gunmen who set off a vehicle bomb and then fired into his car in Abzard, 70 km (43 miles) east of the capital Tehran.

Over the weekend, Iranian officials accused “Israel and the Global Arrogance” of the murder and pledged “harsh revenge”. A newspaper linked to the Supreme Leader’s office called for an attack on the Israeli port city of Haifa.

However, Ayatollah Khamenei’s military aide Hossein Dehghan stepped back from the threat of an immediate response. Khamenei followed on Saturday, calling instead for an investigation and an escalation of nuclear efforts.

Kamal Kharrazi, a former Foreign MInister who heads the Strategic Council on Foreign Relations, continued the line of a measured response: “Undoubtedly, Iran will give a calculated and decisive answer to the criminals who took Martyr Mohsen Fakhrizadeh from the Iranian nation.”

On Sunday, Parliament’s National Security Commission passed a motion ordering the Government to resume enrichment of 20% uranium, halted by the 2015 nuclear deal between Iran and the 5+1 Powers (US, UK, France, Germany, China, and Russia).

The measure calls for 120 kg (264 lbs.) of 20% uranium per year, from the start of March. Advanced IR-6 centrifuges will be made operational.

Responding to the Trump Administration’s withdrawal from the nuclear deal and imposition of comprehensive sanctions, the Rouhani Government has suspended some provisions to increase production of low-enriched uranium.

However, it has refrained so far from returning to 20% enrichment, which can potentially lead to a military-grade uranium of more than 90%.