EA on Media Outlets: “Welcome to Most Important Period in US History Since Civil War” 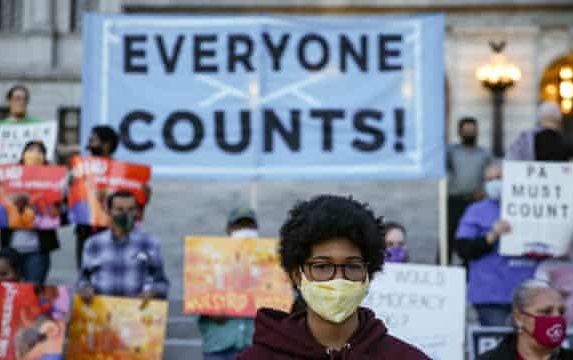 The “Count Every Vote” display in Harrisburg, Pennsylvania (Jemal Countess/Getty)

A chat with Turkey’s TRT World which begins with the question, “If Trump wins, can he unite America?” (No.) and moves to the more important question, “What can a Biden Administration do in its initial months?”

Just before Joe Biden took the lead in Pennsylvania and in Georgia, I spoke with Monocle 24’s Andrew Mueller about the state of the election and the legal options for Trump’s team.

Their plan is out in the open — to get the Supreme Court not to rule on the law or the Constitution, but to politically back Trump.

Their other option? Whip up the conspiracy theories, whip up the disinformation, shout that mail-in balloting is fraudulent, bring supporters out on the streets….

ORIGINAL ENTRY: With the US Presidential election still in the balance, I spoke with BBC Radio 2’s Jeremy Vine on Thursday and talkRADIO’s Julia Hartley Brewer on Friday.

Both discussions move beyond the status of the vote to consider America at a crossroads, with Donald Trump using disinformation, conspiracy theory, and — he hopes — the Supreme Court to cling to power.

Will Trump succeed in breaking the US system? And if he doesn’t, how can the US be repaired during a Biden Administration?

Trump’s lawyers will try to get ballots thrown out with argument on procedure. Meanwhile, they will go big with exaggerated claims to throw mud at everything.

So when Rudy Giuliani, Donald Trump’s lawyer, said that “Joe Biden voted 5,000 times” — trust me, he didn’t, he only voted once. When Nigel Farage, probably Trump’s biggest UK supporter, saying “this election might be stolen” — it isn’t, it’s a political line.

These conspiracy theories are what call out groups — that possibility of violence is real if everyone doesn’t back off in a legal and responsible way.

See also EA in the Media: From US Election to Constitutional Crisis

“Welcome to the most important period in American history since the Civil War.”

Professor of international politics Scott Lucas talks to Julia about the legacy and impact of Donald Trump's presidency.

We focus a lot on Donald Trump. But if you were to focus on the state and local level across the US, you’ll see a cross-section of people who have come in — often for the first time in public service — to make America better in the middle of a pandemic, in the middle of an economic crisis, and with all the issues raised this summer.

That is where hope lies in America. I can’t tell you that this will prevail — but it isn’t complete darkness, even if it is dark in the White House right now.