Biden’s Officials: America Re-Engages with Competence and the World 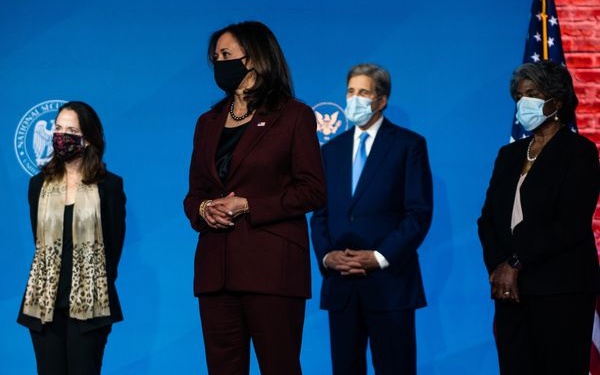 Written for The Birmingham Brief and for EA’s partner America Unfiltered:

The adults are back in the room in Washington.

US President-elect Joe Biden’s designation of his first officials for national security and foreign policy was not just a signal; it was a spotlight shone for Governments, businesses, and NGOs around the world of an America re-engaging with competence, responsibility, and multilateralism.

Each of the officials, joining Biden at a Tuesday press conference in Wilmington, Delaware, has extensive experience at the highest levels of the Federal Government. Each served in the Obama Administration in which Biden was Vice President….

See also EA on BBC and The Daily Show: Biden’s Officials — “The Adults Are Back In the Room” — as Trump Fumes
Biden’s Thanksgiving Call for Unity: “Our Enemy is the Virus, Not Each Other”

Of course, a return to competence and engagement does not guarantee smooth relations. A lot of repair work is needed in the US after the damage of the Trump years, and with the country still polarized, the Biden Administration is likely to face obstacles in Congress — particularly if top Senate Republican Mitch McConnell decides to be obstructionist — in the media, and among right-wing constituencies.

Biden is already guarding against his Presidency as an “Obama third term”, and his advisors have acknowledged shortcomings from their earlier service. Secretary of State-designate Antony Blinken said, “We failed to prevent a horrific loss of life” with failure to protect Syria’s civilians from mass killing.” Others have mentioned the lack of recognition the scope of Russia’s interference in the 2016 US Presidential election until it was too late to act, and a slow response to the economic and political actions of China.

Russia and China will be near the top of the agenda as soon as Biden is inaugurated. The path back to an Iran nuclear deal will be tricky, if not impossible, and North Korea has exploited Trump to advance further with its nuclear weapons program. Preceding all of this is the immediacy of the pandemic, and the scale of the threat of climate change.

Even relationships with allies will need time to rebuild. Topics such as contributions to NATO through increased defense spending or a reworking of the Trans-Pacific Partnership are no closer to resolution. On top of this is the self-inflicted damage of a UK isolating itself from the European Union, and thus from the Biden Administration’s conception of the multilateral, through Brexit.

But for now, the precondition of an Administration playing by the rules of the diplomatic game rather than suspending them for a Twitter blast, has been met.

It’s not as much “America is Back” — that’s an applause line for the domestic audience. It’s more “Competence is Back”.