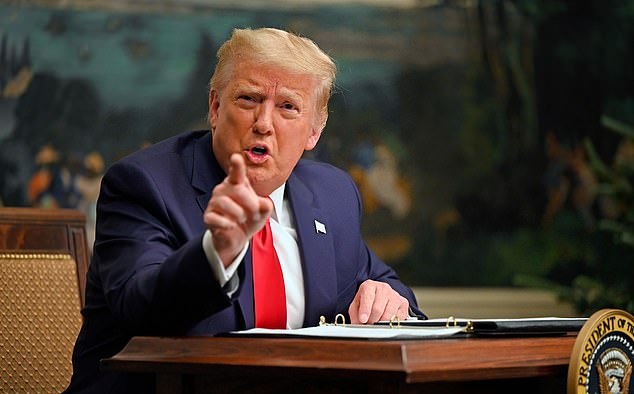 For the first time, Donald Trump has said that he may leave the White House on January 20, when President-elect Joe Biden is inaugurated.

Trump told reporters on Thursday that he will accept the Electoral College vote on December 14, which is expected to confirm Biden’s 306-232 margin from the November 3 election.

Trump continued to push disinformation and unsupported claims of about “massive fraud”, saying that it would make it “very hard” for him to concede.

While he insisted that “shocking” new evidence about a rigged election would surface before Inauguration Day, he said, “Time is not on our side”, and referred to “the Biden Administration”.

When a reporter spoke up during one of Trump’s rambles, the defeated candidate snapped. He raised his voice and pointed his finger:

The statement about the Electoral College appeared to bury Trump’s hope that one of scores of lawsuits would make it to the Supreme Court, where his appointees and other conservative justices would help him overturn the result.

Attorneys for Trump and his allies have won only one of more than 40 lawsuits across key states, with the only victory affecting just a few hundred ballots in Pennsylvania. The Keystone State, as well as others such as Michigan, Georgia, and Nevada, have certified results — despite Trump’s attempt to get Republican-majority legislatures to set aside the popular vote and designate his electors for the Electoral College.

For the first time, Trump turned his attention to the two Senate runoff elections in Georgia, scheduled for January 5. He said he will soon travel to the state to support incumbent Sens. David Perdue and Kelly Loeffler.

If Democratic challengers Raphael Ossoff and Jon Ossoff triumph, the Senate will be divided 50-50 with new Vice President Kamala Harris as the deciding vote.

On Thursday night, Trump appeared to back away from his acceptance of an Electoral College verdict, complaining that news outlets had missed the real point of his comments.

I gave a long news conference today after wishing the military a Happy Thanksgiving, & realized once again that the Fake News Media coordinates so that the real message of such a conference never gets out. Primary point made was that the 2020 Election was RIGGED, and that I WON!

The tweet reverted to Trump’s fantasies during the White House appearance, when he maintained, “We were robbed. We were robbed. I won that by hundreds of thousands of votes. Everybody knows it.”

He continued, “If the media were honest and big tech was fair, it wouldn’t even be a contest. And I would have won by a tremendous amount.”

Then he reverted to the fantasy, “And I did win by a tremendous amount,” he added.

But in another step back, he entertained the question if he would attend Biden’s inauguration: