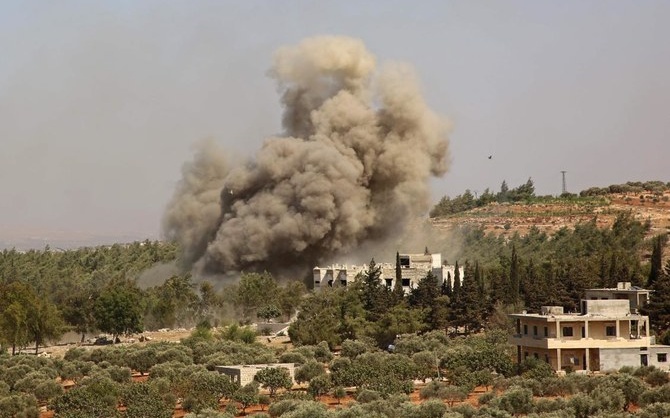 Tuesday’s missile strikes were on civilian areas in the Jisr al-Shughour region of western Idlib Province, nominally under a ceasefire agreed by Russia and Turkey on March 5.

3 martyrs and 13 wounded as a preliminary outcome, as a result of the Russian aggression's 8 air strikes targeting the "Hamama" forest in Jisr Al-Shughour countryside, west of Idlib.#syria #Idlib pic.twitter.com/UZFHvLdXDc

Claims circulated of about 4,000 civilians fleeing to towns such as Salqin and Darkush in Idlib Province and Afrin in neighboring Aleppo Province.

A Russian-regime offensive from April 2019 to March 2020 killed about 2,000 civilians and wounded thousands as it advanced through northern Hama Province and parts of Idlib. More than 1.4 million civilians were displaced.

The offensive was checked by the March agreement between Russian and Turkish leaders Vladimir Putin and Recep Tayyip Erdoğan, but Russia has periodically bombed areas in Idlib and western Aleppo Provinces. Regime forces did not stop shelling, and there have been clashes between pro-Assad troops and anti-Assad factions in southern Idlib near the border with Hama Province.

The attacks are far from front line positions and are very near IDP camps and civilian settlements.#syria #Idlib pic.twitter.com/MaSDf5rtuE

“May Amount to Crimes Against Humanity”

HRW concluded that the strikes are “apparent war crimes, and may amount to crimes against humanity”.

The organization’s head Kenneth Roth summarized to Reuters, “They hit hospitals, schools, markets, residential areas. Not just inadvertently, not while they were trying to target the so-called terrorists, but deliberately.”

The report cites 10 senior Russian and Syrian officials as responsible. They include Bashar al-Assad, Putin and their top military commanders.

Neither the Assad regime nor the Kremlin responded to HRW’s request for a reply.

Roth called on the international community to press for accountability: “It’s really only by following up and ensuring that these people who have overseen these war crimes, do not get away with impunity, that there are consequences for pursuing this war crime strategy.”