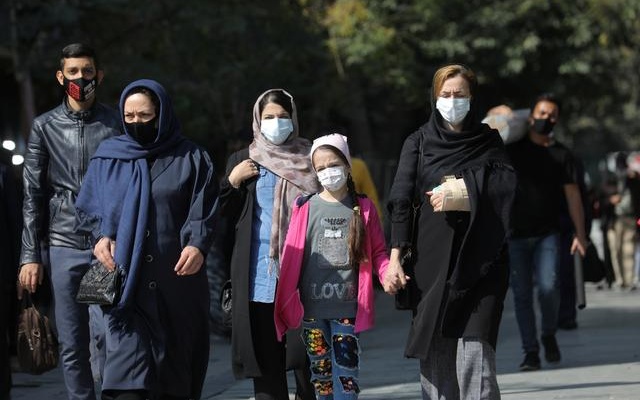 The Health Ministry announced 279 fatalities and 4,830 confirmed infections in the past 24 hours.

Iran has announced a new daily record for Coronavirus deaths as Government official say a mandatory mask order will be extended beyond the capital Tehran.

The Health Ministry declared 272 deaths on Monday, raising the official total to 28,816.

The Ministry reported 4,206 infections in 24 hours, the fifth day in the last seven with more than 4,000 cases and the second-highest daily total since the beginning of the outbreak in February.

Health Minister Saeed Namaki announced the extension of the mask order, implemented in Tehran on Saturday:

We have asked the police and the basij (paramilitary volunteers) and other agencies to help us…fight violations more severely.

It has been decided that this action would start from Tehran and will be extended to other large cities in the coming weeks.

Ali Akbar Salehi, head of the Nuclear Energy Agency and a former Foreign Minister, is the latest high-profile official to test positive for the virus.

With Coronavirus surging to record daily levels of deaths and cases in Iran, the Rouhani Government implements a mandatory mask order in the capital Tehran.

President Hassan Rouhani had announced the measure in a mid-week meeting of the National Coronavirus Task Force and he confirmed in a Saturday statement that it has come into effect.

He said the mandate for masks in all locations could be extended to other cities, with 26 of Iran’s 31 provinces declared as “red zones”.

Masks have been compulsory in indoor spaces since July.

The Health Ministry announced a record of 239 deaths in 24 hours on Wednesday. Cases set a new daily mark of 4,392 on Thursday.

The Government had balked at reimposed measures from the spring, closing public spaces, that checked the first wave of the pandemic. Amid Iran’s economic crisis, businesses, mosques, shops, restaurants, and other public spaces were reopened from April 11.

The lifting of the restrictions led to a quadrupling of cases by June and a surge in deaths. Rouhani still held out against closures, citing the need for economic activity.

However, the latest spike led to the closure of schools, mosques, shops, and restaurants in Tehran for a week from October 3. On Friday, the Tehran provincial governor extended the measure for another week.

Vice President Mohammad-Baqer Nobakht, in charge of economic and budget planning, announced on Saturday that he has tested positive for the virus.

“I am under observation. Thank God my general condition is good,” he tweeted.

The first wave of the virus killed two MPs; an advisor to Foreign Minister Mohammad Javad Zarif; Iran’s former Ambassador to the Vatican; a Revolutionary Guards commander; a member of the Assembly of Experts; and two members of the Expediency Council, which advises the Supreme Leader.