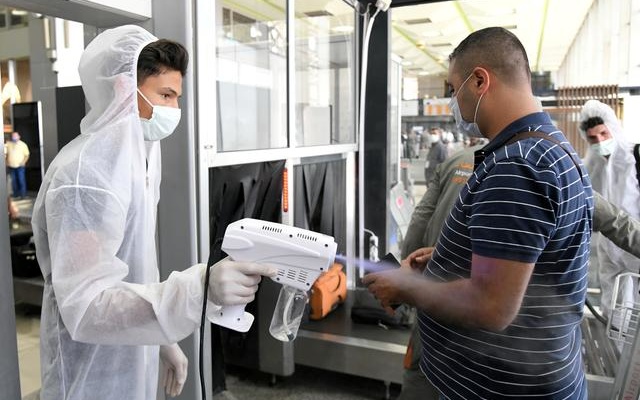 A health worker sprays sanitizer on a passenger at Damascus International Airport as it reopened for regular international commercial traffic, October 1, 2020

In the large Najha cemetery outside Damascus, the burials of victims point to the actual death toll in Syria from Coronavirus.

The Health Ministry has reported only 4,504 cases and 212 deaths. But medics, activists, and residents have said from the start of the outbreak in February that the Assad regime is minimizing the fatalities and infections.

The World Health Organization is now saying that the scale of the pandemic is being hidden by limited testing capability in Damascus. A model from the London School of Economics projected 2 million cases by the end of August without containment measures.

The Najha cemetery usually handles around 40 burials a day, but witnesses and cemetery officials report more than a tripling since July in the ground south of the Syrian capital.

Abdul Rahim Badir, who issues Najha’s burial certificates, said he had never seen such a surge: “We are already digging a mass grave that could bury thousands.”

Some ceremonies are being held at night to avoid a pile-up of bodies.

Senior regime officials, including the Information Ministry, declined to comment on the escalation of burials.

However, a “senior coordinator in a major Western NGO, said deaths rose in a “major and unprecedented spike in July and most of August” to an average of 120 per day, easing to about 60 last month.

WHO’s Syria representative Akjemal Magtymova said, “A lot of cases are still going unreported, and the actual number of COVID-19 cases is much higher….Damascus and rural Damascus are the hardest hit.”

In August, the Syrian American Medical Society published a list of 61 doctors who died “in the last few days”, and an SAMS official said another 87 medical workers have perished since then.

More than 200 UN staff members in Syria had been infected by early September, according to a letter from the UN Resident Coordinator and Humanitarian Coordinator.