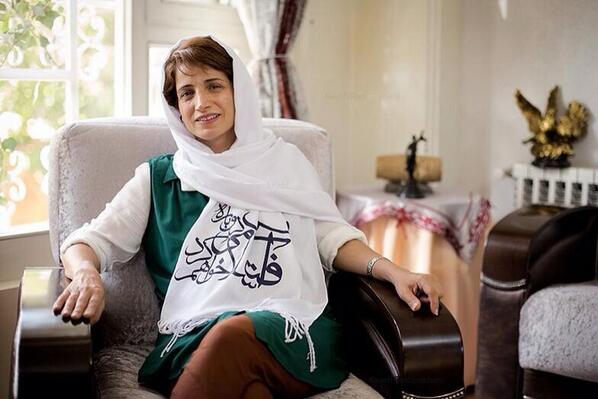 Iranian authorities have punished human rights attorney lawyer and political prisoner Nasrin Sotoudeh (pictured) for her 47-day hunger strike, transferring her to one of Iran’s most notorious detention facilities.

Sotoudeh who ended the strike on September 27, has been moved from Tehran’s Evin Prison to Qarchak Prison outside the capital.

She was due to undergo a heart examination and angiography on Tuesday.

Sotoudeh’s husband Reza Khandan wrote on social media: “Today the officers of the public ward of Evin Prison called on Nasrin to get ready for being sent to the hospital. But after leaving prison, they transferred her directly to Qarchak.”

Human rights activists report that Qarchak has more than 2,000 detainees, some with children, in overcrowded sections of 200 to 300. There are no rooms in the prison but a large hall with 600 beds and other detainees sleeping on the floor. Food and hygiene are poor, and medical services are lacking.

The women reportedly suffer torture which includes rape. Those who protest are sent to solitary confinement.

Sotoudeh, the winner of the Sakharov Prize for Human Rights, began the hunger strike on August 11 to focus attention on political prisoners amid the risk of Coronavirus and “unfair and illegal” conditions.

She halted the strike after she was returned to Evin Prison, in what Khandan called “the worst of physical conditions without any medical intervention”, following five days in hospital.

Sotoudeh was a political prisoner from 2010 to 2013 over her representation of participants in mass protests after Iran’s dispute 2009 Presidential election. She was detained again in June 2018 because of her defense of women protesting against compulsory hijab.

The human rights defender has been given concurrent totaling 33 years in prison and 148 lashes for “conspiracy against national security”, “spreading lies”, and “disturbing public opinion”. She must serve at least 12 years.

On September 22, 47 state members countries of the UN Human Rights Council called for the release of the attorney and human rights activist Narges Mohammadi, another winner of the Sakharov Prize.

Mohammadi’s 10-year sentence was reduced and she was released from prison on October 8. However, having denied Sotoudeh furlough throughout the Coronavirus pandemic, authorities did not alter her status.

On October, 1 Sotoudeh was awarded an Alternative Nobel Prize on October 1 by the Right Livelihood Foundation.