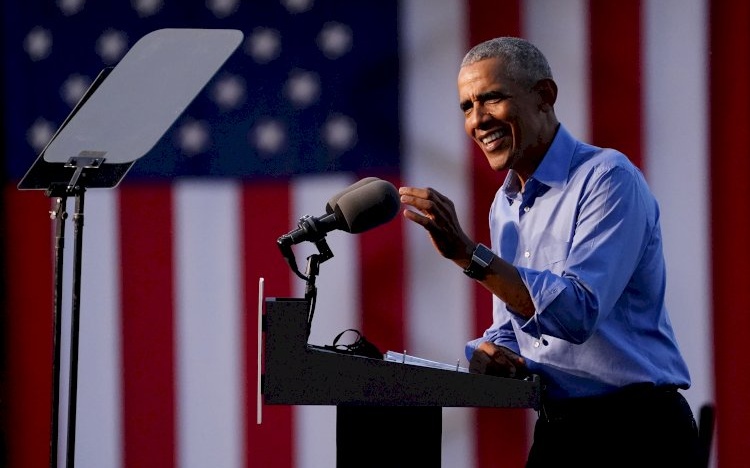 Barack Obama raises hopes before the November 3 election, calling for support of Presidential candidate Joe Biden and a positive response to the damage caused by Donald Trump since 2017.

Campaigning for Biden in Philadelphia, the 44th President summarized:

I never thought Donald Trump would embrace my vision or continue my policies, but I did hope for the sake of the country, that he might show some interest in taking the job seriously.

But it hasn’t happened. He hasn’t showed any interest in doing the work or helping anybody but himself and his friends.

He challenged Trump’s mismanagement of the Coronavirus pandemic, noting that Trump has said that there is “not much” he would change about the Administration’s response.

“Really?” Obama asked. “Not much? Nothing you can think of that could have helped some people keep their loved ones alive?”

He noted that Trump had disbanded the White House pandemic response team which the Obama Administration had set up: “Donald Trump is going to suddenly protect all of us. He can’t even take the basic steps to protect himself.”

“This Is Not A Reality Show”

Obama noted that the US economy was growing when he left office “just like everything else he inherited, he messed it up”.

He chided Trump over his suspect financial affairs, including his failure to pay Federal taxes — “My first job was a Baskin Robbins [ice cream parlor]….I think I might have paid more taxes” — and Tuesday’s revelation that Trump maintains $17.5 million in a Chinese bank account:

How is that possible? A secret Chinese bank account.

Listen, can you imagine if I had had a secret Chinese bank account when I was running for reelection? You think Fox News might have been a little concerned about that? They would have called me Beijing Barry.

He returned to the central issue of Coronavirus, “This is not a reality show — this is reality. Four years ago, you’d be tailgating here instead of watching a speech from your car.”

Then he turned to Joe Biden, Vice President throughout the Obama Administration, and his running mate Kamala Harris.

Obama explained that he “came to admire Joe as a man who has learned early on to treat everyone that he meets with dignity and respect”. Contrasting Biden’s behavior with that of Trump, he noted the candidate would “never call the men and women of our military suckers and losers”.

He and Kamala are going to be in the fight not for themselves, but for every single one of themselves.

A Biden Administration “just won’t be so exhausting,” Obama said. “[We are] not going to have to think about the crazy things…and that is worth a lot.”

Obama began the day at a youth center in North Philadelphia, urging people to vote to return the US to the right direction:

With my election, I think we had probably gotten over-optimistic about how much change had happened in the country. But that change was real. There was some pushback. And that was real, too.

We can’t afford another four years of this, because what happens is you do get to a point where you go so far backward that it becomes really hard to dig yourself out of that hole.

He again noted Trump’s mishandling of the pandemic: “the degree of incompetence and misinformation, the number of people who might not had died had we just done the basics, the degree to which it has impacted low income communities so disproportionally, that’s something that I’m not just confident that it can be fixed, there’s proof”.

But he concluded with hope:

Folks, seeing your effort out there is going to be inspiring. Don’t be discouraged.

We cannot afford four more years of this, Philadelphia. We can vote for change.