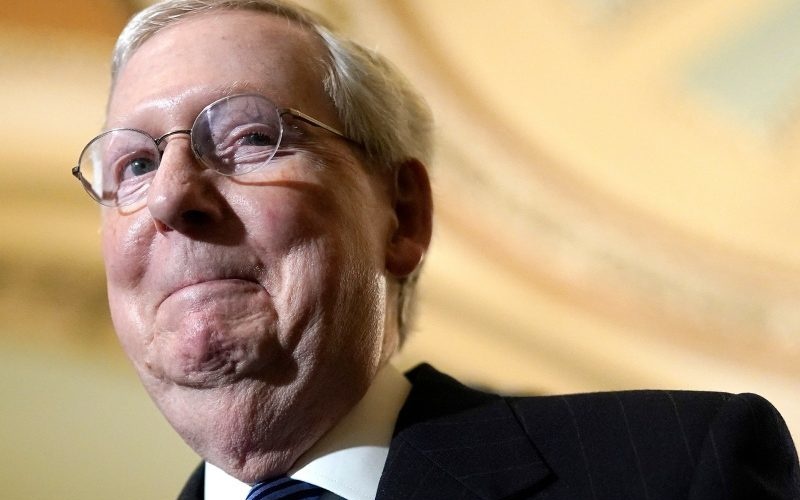 Senate Majority Leader Mitch McConnell is trying to block any agreement on a Coronavirus relief package before the November 3 election.

With Treasury Secretary Steven Mnuchin and House Speaker Nancy Pelosi nearing an accord on a compromise between $1.8 and $2.2 trillion, McConnell privately told fellow Republican senators on Tuesday that he had warned the White House not to complete the negotiations.

McConnell said the Senate’s time should instead be used to rush through the confirmation of Supreme Court nominee Amy Coney Barrett.

Less than two weeks ago, Trump ordered McConnell via Twitter to break off the months of discussions. However, trailing Democratic Presidential candidate Joe Biden in both national polling and swing states — and with a majority of voters favoring an agreement — Trump reversed himself and demanded a deal.

He told Fox and Friends on Tuesday morning, before the Majority Leader’s meeting with Senators, “He’ll be on board if something comes. Not every Republican agrees with me, but they will.”

Pelosi told Democrats yesterday that the latest conversation with Mnuchin had yielded “common ground as we move closer to an agreement….Both sides are serious about finding a compromise.”

The compromise package included a new set of stimulus checks to US taxpayers and aid to businesses.

But conservative Republican senators said that they will not support a second relief package, following a $2.2 trillion assistance bill in March. They cite the projected Federal budget deficit this year of $3.1 trillion, fueled by the December 2017 tax cuts which they passed as well as the economic impact of thpandemic.

The senators also back McConnell’s emphasis on completing the confirmation of Barrett, a process unprecedented this close to an election.

The second-ranking Republican Senator, John Thune, backed McConnell, “The mechanics of getting the deal done would be challenging, to say the least.” He declared that the “fog of the election” is distorting the talks and warned that “people have gone to their battle stations”.

White House Chief of Staff Mark Meadows cautioned, “We’re not just down to a difference of language or a few dollars,” but held out the possibility of agreement: “We still have a ways to go, but I would say that the conversations today were productive enough to continue to have discussions tomorrow.”

The Trump Administration stepped away from the talks last month, even after Pelosi compromised with a $2.2 trillion proposal after originally presenting a $3 trillion package.

But Mnuchin has now tabled an offer of almost $1.9 trillion, nearly four times the $500 billion that McConnell has proposed in a bid to win over voters before November 3.

Pelosi said in a TV intervie w on Tuesday,“We’re on a path — you have to be optimistic. As the Secretary and I say to each other, if we didn’t believe we could get this done, why would we even be talking to each other?”

The Speaker has instructed committee chairmen and staff to resolve differences on funding levels and language in the bill.